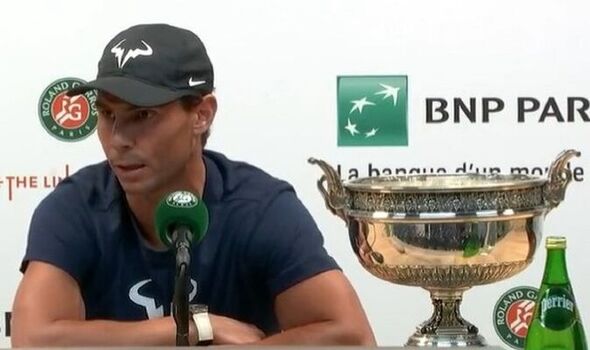 Rafael Nadal has confirmed that he doesn’t “want to miss” Wimbledon after winning his 14th French Open title. The 36-year-old played the tournament with his foot numbed from anaesthesia injections as a result of his chronic injury and will be undergoing a procedure next week, only playing Wimbledon if the treatment is successful.

Nadal has won the first two Grand Slam tournaments of the year – the Australian Open and Roland Garros – for the first time in his career. It puts him halfway to achieving the calendar Grand Slam though the Spaniard has been in doubt for Wimbledon as a result of his chronic injury, and he has now shared his plans for the tournament after winning the French Open.

But the 36-year-old said he would only compete if a treatment he is set to have on his foot next week is successful in dulling the pain of his chronic injury. Nadal confessed to playing the French Open with anaesthesia injections in the nerve of his foot to stop him from feeling the pain but does not want to “do [it] again” in his career.

The newly-crowned French Open champion explained he would be having a treatment to “burn” the nerve and rid it of feeling with the same effect the injections had but for the long-term. “That is what we are planning to do in the next week,” he explained. “It’s going to be a radiofrequency injection on the nerve to try to burn the nerve a little bit and create the impact that I have now.”

Nadal confirmed he would not be playing at Wimbledon if the procedure didn’t work but admitted he wanted to win the tournament when asked. He said: “If you ask me if I will be in Wimbledon I can’t give you a clear answer. If I want to win Wimbledon? Of course. So let’s see how the treatment works.”

But Nadal ruled out repeating his French Open tactic of using injections after admitting it came with “risks”, including the chance of turning his ankle. “The risks I took here, I won’t take them for the rest of my career. That was a one-shot,” he admitted.

“Wimbledon has always been a priority. If it works with the new treatment yes [I will play]. If not, no, I won’t do anaesthetics again, it’s not my philosophy of life.”