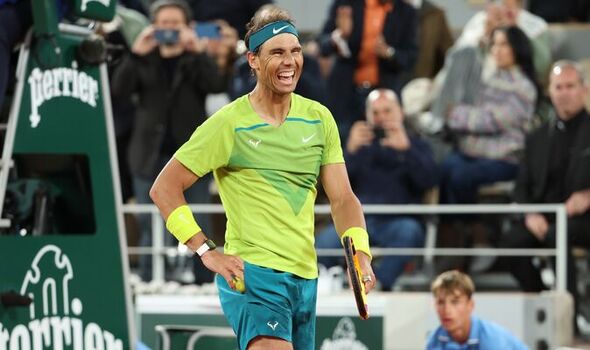 Rafael Nadal’s four-set victory over Novak Djokovic in the French Open quarter-final has prompted John McEnroe to claim that the Spaniard is playing at his best-ever level while on the brink of his 36th birthday. The world No 5 will face Alexander Zverev on Friday as he celebrates his birthday and the retired American admitted he couldn’t bet against him.

Nadal was in doubt to play the French Open after struggling with his chronic foot injury in Rome less than three weeks before the tournament started but now finds himself in the semi-final after beating his biggest rival Djokovic 6-2 4-6 6-2 7-6(4) in a four-hour-and-12-minute epic on Tuesday night.

The Spaniard is a 13-time champion in Paris but ahead of his quarter-final clash with the reigning champion, even Nadal admitted that it was one of the few times he wasn’t the favourite going into a Roland Garros clash. But after his impressive display against Djokovic, McEnroe has now claimed he doesn’t think the fifth seed has “ever” played better despite being about to turn 36.

“Now, it seems like you would have to be crazy to bet against him,” he said of the 21-time Grand Slam champion while commentating Wednesday’s quarter-final between Marin Cilic and Andrey Rublev on Eurosport. “His birthday is Friday, when he plays Zverev. He will be 36, and I’m not sure that I have seen him play better than what I witnessed last night.”

But the retired seven-time Major winner knew he was also caught up in the aftermath of the incredible 59th meeting between Djokovic and Nadal, adding: “I’m sure there has been close, and there have been a number of times where he has played at an extraordinary level. That was one for the ages.”

The world No 1 had been given an advantage when the match was scheduled in Tuesday’s night session, as Djokovic himself had confessed that he and Nadal would be making “different requests” with the Serb preferring the tournament’s new night matches and Nadal admitting he didn’t like playing on the surface in the evening.

But that didn’t seem to matter as the world No 5 looked like a 13-time former champion on Court Philippe-Chatrier, and McEnroe said he had made the mistake of counting Nadal out in cooler conditions in the past when the tournament was postponed to October in 2020.

“Well, I would say I have made the mistake a couple of years ago thinking the colder conditions would hurt him against Novak,” he said, referring to the Spaniard’s 6-0 6-2 7-5 win over Djokovic in the final two years ago.