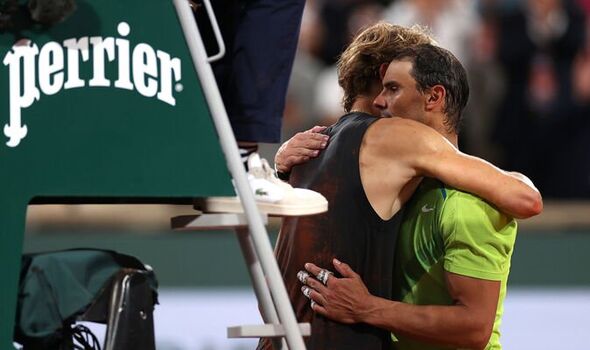 The German screamed in pain and then rolled on Court Philippe-Chatrier in agony after the horror fall at the end of the second set.
The No.3 had been stretching for a forehand after three hours and three minutes of a brutal contest. After his injury was assessed, he returned to the court on crutches to huge applause to concede the match which had been 7-6 6-6 after three hours and three minutes of play.

It left Nadal to go through to his 14th French Open final. The Spaniard, who celebrated his 36th birthday today, has won his previous 13. Nadal, who embraced Zverev in emotional scenes.  said: “It is tough for him. Very said for him. I was in the small room with him just before he came back out and for me to see him crying there is a very tough moment.

“He was playing an unbelievable tournament. I know how much he is fighting to win a Grand Slam. The only thing that I am sure about is that he will win not just one but more than one.

The match had been on course for breaking records after a 91-minute first set where Nadal saved four set points from 2-6 down in a remarkable 18-minute tiebreak.

The second set started with four consecutive breaks of serve – including a 44-shot rally to end the third game – and only one hold in the first nine games. Nadal was broken four times in a row and finally held his serve at 5-5 after 71 minutes and raised his arms in celebration. Zverev suffered his horrible injury at 40-30 5-6 and the semi-final should  have gone to another tiebreak.

“It has been a super tough match,” said the Spaniard. “Over three hours and we didn’t even finish the second set. It is one of the biggest challengers on the tour today when he is playing at this high level. Of course, for me being in the final at Roland Garros one more time is a dream.”

The Australian Open champion has now won 13 consecutive Grand Slam matches – and last lost in a Major in the semi-final here to Novak Djokovic last year.