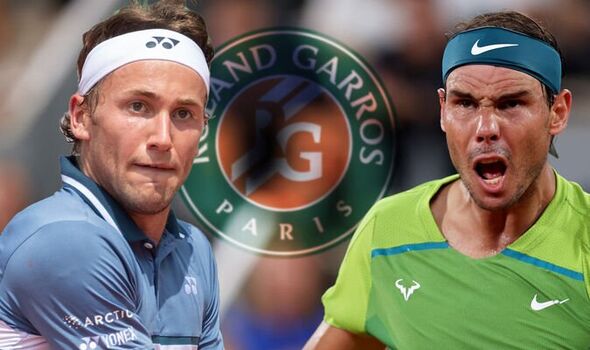 Rafael Nadal has been hailed as the Real Madrid of tennis before he bids to beat his “student” and win his 14th French Open title on Sunday. Norway’s Casper Ruud, who trains at Nadal’s Mallorca academy, reckons facing the Spaniard in the final here is probably “the greatest challenge” in sport.

The King of Clay has played 13 finals at Roland Garros – and won them all. And the 36-year-old has lost only three of his 114 matches here since his winning debut here in 2005. The Real Madrid fan was at the Stade de France last Saturday night to see Los Blancos win a 14th Champions League title against Liverpool.

The next day he needed to come through a five-set battle against Felix Auger-Aliassime and then knocked out world No.1 Novak Djokovic in an epic quarter-final. He is now one win away from a 22nd Grand Slam title despite a chronic foot problem which makes him a fitness doubt for Wimbledon.

And his uncle and former coach Toni said: “Everyone wants to dethrone him – that’s normal. We have seen it with football this season. Madrid were under pressure against PSG, Manchester City and they won. The people who fight are usually always there at the end to win the trophies. And Rafael is a fighter. And I always believe that when he goes out on court, if he is fit, he is the player to beat.”

No.8 seed Ruud is the first Norwegian to ever reach a Grand Slam final. But the 23-year-old said: “I think I could probably tell you all the finals and who Rafa has played and who he has beaten because I watched them all on TV.

“To play Rafa in a Roland Garros final is probably the greatest challenge there is in this sport. I believe he’s 13-0 in the finals, so it just shows that it might sound like an impossible task. I will be the underdog. He has played so many finals, but at least he is playing a student from his academy this time. So it is going to be a fun one hopefully.”

Claycourt specialist Ruud based himself at the Rafa Nadal Academy in Manacor in 2018 and regularly hit together although they have never played a competitive match. “We have played some practice sets, and he has always pretty much beaten me,” Ruud smiled.

“There’s been some close sets, 7-6, 7-5, but it always goes in his favour. But it’s because we are playing in the academy and I want to be nice to him!”

Nadal said: “I think in the academy we were able to help him a little bit. But more than that, I like to see the good person achieving his dreams.”

Nadal’s semi-final against Alex Zverev ended when the German fell and suffered an ankle injury. The Olympic champion posted on his Instagram story: “Looks like I have a very serious injury but the medical team—the doctors—are still checking on it and we’ll keep you updated.”