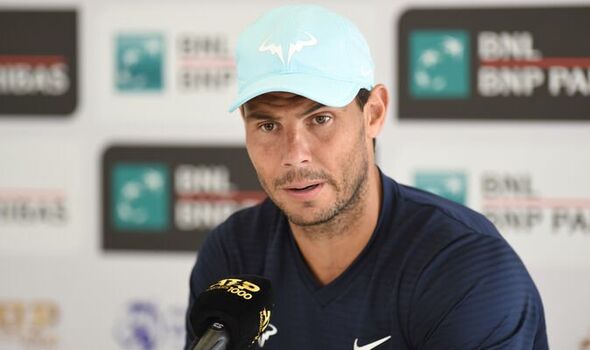 Rafael Nadal has insisted that it will be ‘good news’ if he faces Novak Djokovic at the Rome Masters as it would prove he has been in good form. The iconic pair could still meet in Rome, with Nadal beating John Isner in the last-32 on Tuesday.

Nadal was not entirely pleased with his performance in the 6-3 6-1 victory over the American. But the Spaniard has generally been in good form recently, despite losing to starlet Carlos Alcaraz in Madrid last week.

He could face Djokovic at some stage in Italy providing he overcomes Denis Shapovalov on Thursday. Djokovic is into the last-16 having beaten Aslan Karatsev on Tuesday.

Nadal’s record in 2022 is 23-2 and he is not daunted by the prospect of facing Djokovic in Italy. The 35-year-old points out that it would show he has won several matches, given that they would play each other in the latter rounds of the tournament.

JUST IN: Djokovic should be barred as Wimbledon chiefs told Russia ban is wrong

The 21-times Grand Slam champion is managing his fitness ahead of the French Open – a tournament he has won 13 times. But he has said he is not thinking about preparing for Roland Garros while he plays in Italy.

He added: “I don’t take these tournaments as preparation for any other, because they are historical events. But now we are in a different perspective after the injury. I am more focused on my daily improvement rather than the rivals, thinking about what I have to do to improve, although the most important thing is to feel that I am in an ascending line.”

In a press conference on Thursday, Nadal was questioned on Wimbledon’s ban on Russian and Belarussian players ahead of the summer’s Championship. But the Spaniard was keen to avoid commenting.

The All England Club has prevented players from those nations competing due to Vladimir Putin’s invasion of Ukraine.

“I don’t have a clear opinion on the matter and I don’t want to declare anything. We have to stay in touch with Wimbledon and protect all ATP and WTA players and play for the benefit of all players,” Nadal said.

“I am in Rome, Wimbledon is several weeks away. We work to defend all the players. Nothing will benefit everyone and nothing is perfect, not everyone will like the final decision.”