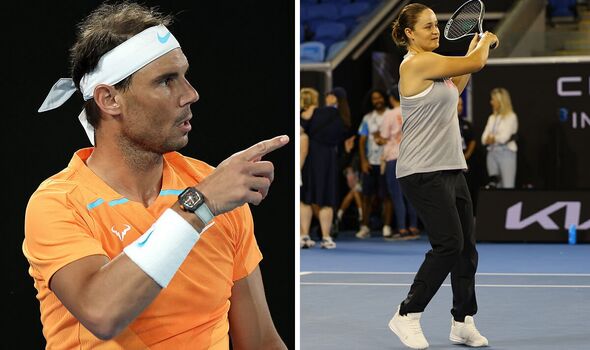 Rain stopped play at the Australian Open today just 24 hours after extreme heat suspended the action on the outside courts. Matches continued under the roofs on the three main courts with stars Iga Swiatek and Jessica Pegula quickly reaching the third round while No.6 seed Maria Sakkari threatened to call the referee over her opponent’s exuberant celebrations.

Rafa Nadal clashed with the female umpire early in his match – then needed a medical timeout – while Felix Auger Aliassime complained about the balls. And defending champion Ash Barty returned to the Aussie Open.

Emma Raducanu will be in action in the first match of the evening session under the roof in the Rod Laver at 8am UK time.

No play was possible until at least 5pm local time (6am UK time) after steady drizzle would not leave the Victorian capital. Temperatures touched 37 degrees yesterday but fell to 17 today in the rain.

The rain delay means lots of doubles matches have been cancelled with British No.1 Cam Norrie will be late on court while Andy Murray is still waiting to learn his next opponent. Aussie Thanasi Kokkinakis was two sets up on Italian Fabio Fognini overnight.

Jamie Murray took to Twitter to complain after today’s schedule was not released until late on Tuesday night local time. “11am start on outside courts. Players must arrive approx 8-8.30am, Schedule released 11.30pm. Unfair.”

World No.1 rocks into third round

“I had listened to the same songs for two years,” said the Pole. “It was tough. It’s still rock. Just different songs. Red Hot Chili Peppers. I think Black Sabbath is there, AC/DC, Led Zeppelin but different songs than before, and Lenny Kravitz. Different but still the same kind of stuff.”

Jessica Pegula’s family own the Buffalo Bills – and she wore a No.3 in support of Damar Hamlin who suffered a on-field heart attack on January 2.

After beating Belarusian Aliaksandra Sasnovich 6-2 7-6, the American said: “I definitely wanted to do something on my outfit. I was in Sydney when it happened so I didn’t have time to do it there, but definitely for Australia. You know, we were kind of figuring out what the Bills and the Sabres were doing just as far as what was the message. I knew they would probably do something and what message were they trying to send. It ended up being kind of the 3 was the symbol.

“So I think it was just something cool and different I could do. It felt kind of special. Ironically I am No. 3 as well. But that’s not why. I think I saw someone tweet that. ‘Why would you put your ranking on your skirt? I’m like: ‘No, that’s not why!’”

Close to a Greek tragedy

Maria Sakkari lost the first set to Russian Diana Shnaider – and her cool – at the Russian’s screams and fist-pumping after saving three sets points.

The Greek raised her finger and told the chair umpire: “If she screams one more time in my face, I’m going to call the referee.”

Later Sakkari said: “During a match you can be very pumped or, you know, the way that some players celebrate their points, it’s not appropriate. I wasn’t happy with that. But, you know, she never did it again. That was very nice of her, so it was, yeah, that was it.

Nadal and FAA not happy

Rafa Nadal struggled with injury during his second tie with American MacKenzie but he had earlier clashed with with umpire Marijana Veljovic over the shot clock.

The Serbian warned the Spaniard he was taking too much time to get his towel and the defending champion complained at the changeover in the first set when he was 1-4 down.

Nadal insisted he needed time to cross the court in the Rod Laver Arena to get his towel and she was starting the clock too early.

“With you it is always the same,” said the top seed.

The discussion re-started at 3-3 in the second set. “Unfortunately I cannot wait all the time,” said Veljovic.

Canadian No.6 seed Felix Auger Aliassime went two sets down against Slovenian Alex Molcan but had an excuse.

“I never complain about this but the balls are not bouncing,” he said. “I don’t know if it’s a batch of cans. I’ve never seen it before.”

The world No.1 retired in March after becoming the first home player this century to win an Australian Open title.

But she was back in Melbourne Park today as part of First Nations Day at the Australian Open.

The three-time Grand Slam winner, who is showing her baby bump, held a coaching clinic with First Nations Ballkids and players.