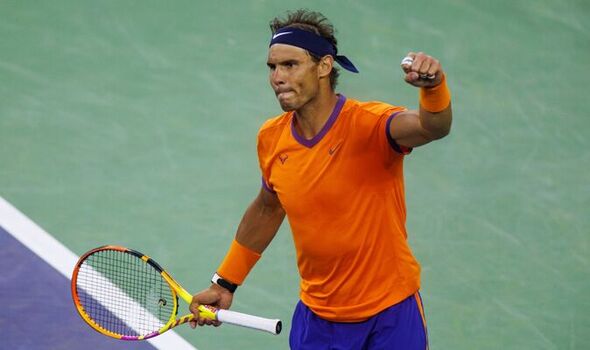 Rafael Nadal’s openness to using a slice shot later on in his career has seen him increase his longevity as a player, according to Patrick Mouratoglou. The Frenchman believes Nadal’s playing style has become more and more aggressive, having beaten Daniil Medvedev in that manner back in the Australian Open final in January.

The Spaniard, 33, has won a record 21 Grand Slam titles throughout his career. Since 2005, he has only failed to pick up a trophy in any given year three times.

Nadal has consistently won titles since achieving his first taste of Grand Slam glory at the age of just 20. But the veteran has added to his trophy cabinet more recently by playing “more aggressive” tennis and “using the slice a lot” to keep opponents on their feet, according to the French coach Mouratoglou.

“First, Rafa’s game has become more and more aggressive,” Mouratoglou said. “Early in his career, he would win games by forcing long rallies from baseline. Now he is looking to step inside the court more, take control of the points and shorten the rallies to conserve energy.

“Third, he has added a new shot to his game. In the Australian Open final, we saw him use the slice a lot to bring [Daniil] Medvedev to the net. He even used the drop shot to make him doubt. Rafa has also improved his volley game, and now, you’ll see him come to the net. If he hadn’t made those changes, I believe that he wouldn’t be the player that he is today.”

Nadal will look to add more trophies to his name when he gets underway in the Madrid Open on Tuesday. The Mallorca-born hero will receive a bye into the round of 32 with fellow Spaniard Carlos Alcaraz and rivals Novak Djokovic and Alexander Zverev also awarded such a luxury.

It will be Nadal’s first match for well over a month, having sustained an injury in the Indian Wells final against Taylor Fritz back in mid-March. But the tennis icon is determined to win the title in his homeland to give fans something to cheer about.

“Despite arriving just before preparation and being difficult, I really want to play and play at home,” Nadal acknowledged. “The opportunities are few. Let’s try to do it in the best possible way. See you in Madrid!”