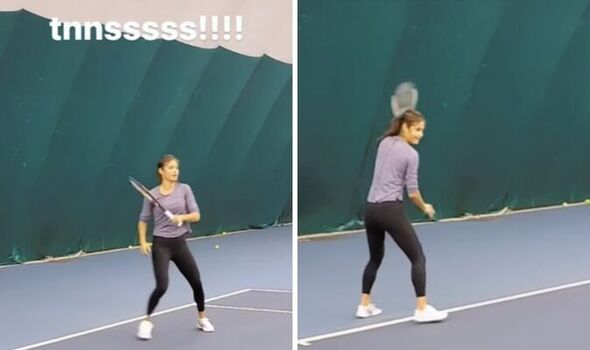 Emma Raducanu has provided an update on her recovery from injury as she returned to the practice court, though there was one noticeable difference. The British No 1 ended her season early with a wrist injury and has finally started hitting tennis balls again, though did so with her left hand as the problem continues to heal.

Raducanu was forced to pull out of the Transylvania Open and Billie Jean King Cup Finals when she injured her right wrist towards the end of what was her first full season on the pro tennis tour. The 20-year-old has since been strength training with one of Andy Murray’s former fitness coaches Jez Green as she was forced to stop playing tennis because of her injury.

But the 2021 US Open champion has now given an update on her recovery journey as she posted a video to her Instagram story showing her return to the practice court, as she hit balls for the first time since pulling out of the BJK Cup Finals after a quick test to see whether she was able to play. Raducanu was clearly excited to be back on the court as she wrote “tnnsssss!!!!” over the video, which showed her hitting balls with her left hand.

It means the Brit’s right wrist has not yet recovered enough for her to begin using her playing hand but she will be able to practise her footwork and movement on a court while subbing in her left hand. Raducanu is currently set to play an exhibition match in Abu Dhabi against world No 2 Ons Jabeur next month, and will be hoping that her wrist heals in time for the event after pulling out of the same tournament last year.

JUST IN: Boris Becker can ‘choose his own job’ in Germany after prison sentence

The Bromley local will then be starting her season at Auckland’s ASB Classic, taking place from January 2. With just over a month to go until her first tournament of 2023, she will be keen to switch back to using her right hand in practice as soon as rehab on her wrist has finished as she looks to climb her way back up the rankings after making her top 10 debut this year.

But those around Raducanu are positive she will be ready, as Britain’s BJK Cup captain Anne Keothavong said the British No 1 would be able to heal despite being forced to pull out of the event dubbed the World Cup of women’s tennis, which came “too soon” in her recovery. “Wrist injuries are never easy, but I think this one is under control,” she previously said, after it was believed that Raducanu had a brief hit with her right hand before ruling herself out of the BJK Cup squad.

“She’s got good people around her and she’s used her time to really work on other areas of her fitness. Right now, from what I understand, it’s something that she will recover from and she’s confident of that, she just needs a bit more time and Billie Jean King Cup is too soon.”