London: Australian great Todd Woodbridge says the level of professionalism that Nick Kyrgios shows in the coming days will have a large influence on whether he’s capable of recording a breakthrough grand slam title.

Having broken his hoodoo of not reaching a major quarter-final since the 2015 Australian Open – when Kyrgios was a teenager – the Australian with two five-setters already under his belt at Wimbledon must steel himself for the arduous phase of a two-week slam.

After grinding to victory against American Brandon Nakashima in a must-watch centre court fourth round match, Kyrgios also became the first Australian man to reach the All England club final eight since he did it on debut in 2014.

More records will beckon if Kyrgios, 27, plays to expectations and defeats Cristian Garin, the unseeded Chilean who quashed the dreams of Alex de Minaur with victory after more than four-and- a-half hours on court on Monday.

It’s 17 years since an Australian man – Lleyton Hewitt at Wimbledon in 2005 – reached a semi at any of the majors. Suddenly, Kyrgios is tantalisingly close to that mark.

But Australian doubles legend Woodbridge has warned that Kyrgios, who woke up with a sore right shoulder after his four-set triumph over Stefanos Tsitsipas on Saturday and took painkillers during his match against Nakashima to manage the niggle, must focus on the one-percenters. 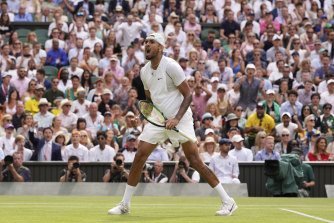 “What becomes important is professionalism now,” said Woodbridge on the BBC. “And that is the recovery – what does he do with recovery?

“I know with Nick – he doesn’t do much of a warm-up. So if you’re coming out here without a proper warm-up some days, or a very light warm-up, and you’re banging down 130mp/h serves, you are going to get a niggle occasionally if you catch it [the ball] in the wrong part of the racquet.

“Hopefully from that perspective we see him do that [manage his body right].”

The Kyrgios serve was again on song against rising American Nakashima as the Australian pounded down 35 aces and had a first serve percentage of 74.

British four-time Wimbledon semi-finalist Tim Henman underscored just how big a weapon that serve is for Kyrgios on the London grass.

“You talk about the great servers in the game – you’re obviously going to talk about and put [John} Isner up there, but it’s like an unfair advantage when you’re six foot 10 [or] six foot 11,” Henman told the broadcaster.

“In terms of that [service] motion, it’s so simple [and effective].

“We analysed his ball toss, how similar it is.

“He can hit the four corners effortlessly. That is such a great foundation because it then frees him up to be aggressive on his own [return] games, and when you’re playing against that you feel that if you drop your serve once, that could be the set over …

“It’s always going to be a big foundation. Add that to the conditions here – the grasscourts. He’s going to like his chances against anyone.”

Speaking about his personal pride in making a career third major quarter-final and having the new-found maturity to deal with road bumps in the sport, Kyrgios said: “I woke up after [the] Tsitsipas [match] and had some shoulder pain. I’ve played so much tennis in the last month and a half, so I almost knew that it was time for my body to start feeling some niggles.

“Mentally I feel like I just deal with these things a lot better now. I knew today I wasn’t feeling 100 per cent, but mentally I stayed quite calm.”

There was another aspect to the Kyrgios game evident in the fourth round – a serene version in comparison to his first- and third-round histrionics – that got a tick from nine-time Wimbledon doubles champion Woodbridge.

Kyrgios explained how he upset Nakashima’s rhythm late in the fourth set before he cleaned up the match in style with a decisive 6-2 final set.

“I knew from the get-go I wasn’t playing as well as I would have liked. I wasn’t feeling the ball like I was against Tsitsipas or [second-round opponent Filip] Krajinovic,” Kyrgios said.

“At the end of the fourth, [I applied a] complete rope-a-dope tactic. I just threw away that service game. I knew he was in a rhythm. He was starting to get on top of me. I kind of just wanted to throw him off a little bit. It worked.”

Woodbridge said the Kyrgios tactics at that point showed the Canberran was thinking right.

“When he more or less gave his service game away [late in the fourth set] I got really concerned thinking ‘OK, you’re not going to serve first in the fifth’. He’d given away the advantage.

“[But] the beginning of the fifth [set], that was when he really stood up and he chased a lot of balls, he worked the ball around the court.

“And then you go ‘OK, he’s engaged again and he’s switched on’. Then going forward, to move deeper in this tournament, that was the best sign that I saw out of that entire match.”

Watch all the action from Wimbledon ad-free, live and on demand on Stan Sport, with matches streaming in 4K UHD from June 27. Coverage of select matches commences on 9GEM from 7.30pm (AEST) each night.