The Australian Open is set to be robbed of another superstar drawcard as officials scramble to determine the playing status – and exact whereabouts – of two-time women’s champion Naomi Osaka.

Without a match in four months, Osaka seems all but certain to miss the Melbourne major having only just arrived back to her US base this week following a jaunt through Europe with her rapper boyfriend Cordae. 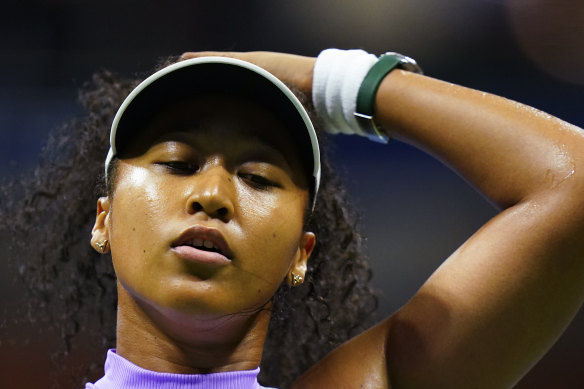 Naomi Osaka at the most recent tennis major, the US Open in New York.Credit:AP

In an Instagram post titled “Europe”, the former world No.1 was in France last week with her US beau, posting a photo sitting together in front of the Mona Lisa, while she also appeared to be at a concert.

Champion at Melbourne Park in 2019 and 2021, Osaka is apparently back in Los Angeles after being tagged in a photo from a pilates studio in suburban LA but has shown no signs of preparing for the Open.

Disgruntled fans have also taken to social media to express their dismay, a number replying to the post and seemingly blaming Osaka’s boyfriend for her not playing tennis.

While Osaka remains on the official Australian Open entry list, the 25-year-old isn’t down to play in Adelaide or Hobart next week.

Officials appear quietly resigned to Osaka not competing at Melbourne Park from January 16-29 as concerns grow that the four-time grand slam champion may not return to the court at all.

Osaka took a mental health break after sitting out the 2021 French Open and later revealed she’d been struggling with depression and anxiety for several years.

Even if she did contest the Open, it’s impossible to imagine Osaka seriously challenging for a third AO title.

The Japanese superstar hasn’t played since withdrawing from the second round in Tokyo last September with abdominal pains and has won only one completed match since last May.

The former world No.1 crashed out in the first round of her previous three events, including the US Open, which she has also won the title twice.

Osaka’s last victory was an abbreviated one to say the least, coming after just one game against Daria Saville when the Australian suffered a torn ACL in Tokyo.

If and when Osaka withdraws from the season-opening slam, she will join a huge void of greats and ex-world No.1s not playing the 2023 Australian Open.

At least nine-times men’s champion Novak Djokovic is back after missing the 2022 edition after having his Australian visa revoked for not being vaccinated against COVID-19.

The Open draw will take place next Thursday, with Carlos Alcaraz the men’s top seed ahead of his Spanish compatriot and defending champion Rafael Nadal.

Polish world No.1 Iga Swiatek is the women’s top seed.

Watch all the summer of tennis action, including the United Cup and the Australian Open, live on Channel Nine, 9Gem and 9Now.