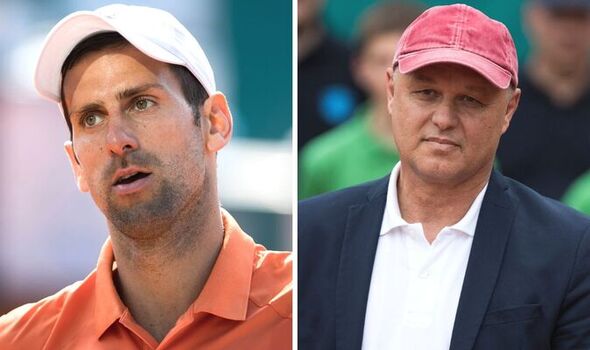 Novak Djokovic’s former coach Marian Vajda has admitted he is yet to tell the world No 1 about his new mentorship with Alex Molcan after announcing their split two months ago. Djokovic had worked with Vajda for 15 years but the pair made the decision to part ways at the end of 2021, announcing the news in March.

Vajda confirmed on Tuesday that he was now coaching Slovakian world No 47 Alex Molcan, after footage of the two training together emerged the day before. It comes two months after he and Djokovic announced they had ended their 15-year partnership.

They made the decision during last year’s ATP Finals, when the Slovak had to fly in to replace Djokovic’s now-sole coach Goran Ivanisevic whose daughter tested positive for Covid, but didn’t make the news public until March. But the 57-year-old has already taken on a new charge in his younger countryman Alex Molcan and has now confessed that he has not told Djokovic about his new partnership with the 24-year-old, instead telling Ivanisevic.

“Novak and me are still friends, it was an amicable split,” he told reporters during his press conference in Bratislava. “I told Goran that we will practise together in Paris. I did not tell Novak (about working with Molcan), but I did tell Goran, so I am sure Novak knows.”

JUST IN: Nadal request made at Madrid Open due to Real Madrid vs Man City

Vajda also revealed that the agents of several top ten players had reached out to him to work together in the wake of his split with Djokovic, but he had decided to go with a Slovakian player instead.

Explaining that Molcan’s nationality played a part in his decision, he said: “I am glad that I will coach the best Slovakin player, it was the decisive factor. I have had a lot of offers after my cooperation with Novak ended, but I wanted to help a Slovakian player – it gave me new energy.”

Vajda also said Molcan was at the same stage of his career as Djokovic when the pair started their partnership, noting: “Alex has the same ranking Novak had when we started working together.”

The long-time former coach of Djokovic also recently admitted that he no longer wanted to travel after the world No 1 thanked Vajda and his other team-members with a ceremony at the Serbia Open. “I was just tired from the many trips, that’s the reason. I’m happy that we were able to greet each other here properly, having also been able to thank him in front of the people of Belgrade,” he said recently.