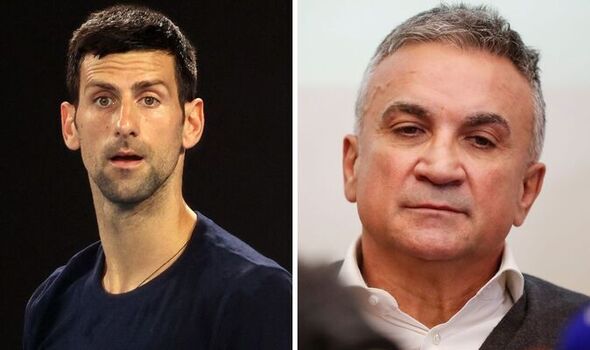 Novak Djokovic’s father has hit out at the Australian government as the world No 8 waits to learn whether he can return to the country for the first Grand Slam tournament of 2023. Djokovic received an automatic three-year ban on entering Australia as a result of being deported at the start of this year, and his dad Srdjan has now hit out at authorities for keeping his son in “prison” as the 35-year-old was made to stay in a government detention hotel in January.

Djokovic hit headlines at the start of 2022 when he arrived in Australia unvaccinated with a medical exemption from Tennis Australia, only to have his visa cancelled at the border. After spending time in a government detention hotel he successfully appealed but had his visa revoked again by the then-Immigration Minister Alex Hawke, failing in his second appeal and finding himself deported on the eve of the Australian Open.

Being deported from Australia results in an automatic three-year ban from returning to the country, and the nine-time champion Down Under is now waiting to learn whether this ban can be lifted in time for him to compete in January. As Djokovic continues to wait for news, his father has now spoken out and slammed authorities for how they handled things at the beginning of the year.

Confirming that the world No 8 wanted to return to Australia if possible, Srdjan told K1 TV: “Novak is full of desire and enthusiasm to continue where he left off, not by his own will, but by the will of the people who gave him the right to decide where he will play. The same as he was when they expelled him.”

JUST IN: Nadal already in Turin for ATP Finals after disappointing comeback

But the 21-time Grand Slam champion’s father also accused the government of trying to “destroy” his son, claiming the rules were only changed while Djokovic was en route to Australia, though the country had always required vaccination or a valid medical exemption to enter. He continued: “I have to choose my words, I didn’t choose them when they kept my child in prison which is the shame of all shames.

“They wanted to break him and destroy him, to show through him that they can do whatever they want. While he was flying on a plane between Dubai and Melbourne they changed the law. Australia was responsible. The situation is the same now. I don’t know if it will change.”

Djokovic’s time at the Park Hotel also received heavy news coverage as the government detention hotel that had become home to many refugees over the years, with some spending as long as nine years detained in the hotel. The Serb’s time in the Park Hotel brought attention to the refugees who had been there for years and they were ultimately released within the following months thanks to the extra awareness raised.

Reflecting on his son’s impact, Srdjan said: “He achieved a very big victory, bigger than all the tournaments he won. His victory is reflected in the fact that a few months ago they released those people who had been in prison for nine years. That is his victory.”