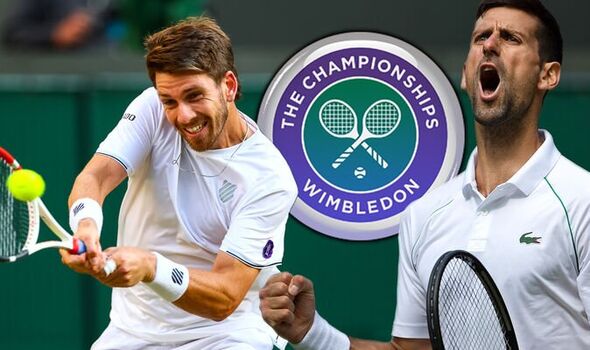 Novak Djokovic is taking on Britain’s Cam Norrie in a bid to reach the Wimbledon final. The top seed is looking to win a 21st Grand Slam title at the All England Club this week while the British No 1 is playing in his first-ever Major final. Nick Kyrgios awaits the winner after receiving a walkover following the withdrawal of Rafael Nadal, who pulled out with an abdominal tear on Thursday evening.

Djokovic and Norrie will do battle second on Centre Court today, after the order of play was rejigged following the withdrawal of Nadal. The pair were due first on court at 1.30pm but have now been sandwiched between the two ladies’ doubles semi-finals to play not before 2.30pm, or later if the previous match goes longer.

It will be just their second meeting after the British No 1 was drafted into last year’s ATP Finals as an alternate, where he suffered a 6-2 6-1 defeat at the hands of the six-time Wimbledon champion. But Norrie isn’t going down without a fight, saying he could beat Djokovic “for sure” when asked. “I think it’s obviously one of the toughest tasks in tennis. I’d say grass is his favorite surface and his record is unbelievable here at Wimbledon. It’s going to be tough,” he admitted after.

Meanwhile, the world No 3 has accepted that he will be battling the Centre Court crowd as well as Norrie today, saying: “We played indoor World Tour Finals, only one encounter that we had, and of course different conditions, different tournament, environment than what it would be playing here in Wimbledon on Centre Court semifinals of a slam in his country, of course. I know what to expect if that happens, you know, in terms of the crowd support and everything.”

Djokovic and Norrie on court next

Novak Djokoic and Cameron Norrie will be up next on Centre Court following the conclusion of the first women’s doubles semi-final.