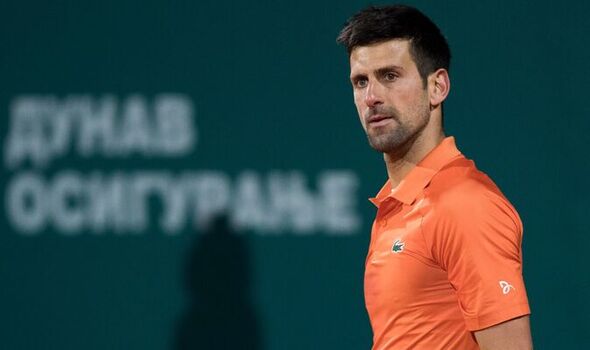 Novak Djokovic has been told he needs to get in at least “ten to twelve matches” ahead of his upcoming French Open title defence. The world No 1 is currently playing just his third tournament of the season in Serbia where he managed to come from a set and a break down in his opening match to end his losing streak.

Djokovic has barely played this year as a result of his unvaccinated status, which kept him out of the Australian Open, Indian Wells and Miami. He suffered back-to-back defeats for the first time since July last year when he crashed out of Dubai in the quarter-finals back in February before losing his first match in 47 days to Alejandro Davidovich Fokina in Monte Carlo.

It looked to be a third successive defeat for the home favourite at the Serbia Open on Wednesday but he recovered from a set and a break down to defeat compatriot Laslo Djere 2-6 7-6(6) 7-6(4) to get a much-needed victory and help him stay in the tournament, where he is hoping to get more matches under his belt ahead of his French Open title defence. The Serb has now been told how many matches he needs to go to Paris in enough form.

“Novak needs ten to twelve matches on clay for this,” former world No 2 Alex Corretja told Eurosport. “Novak – like any other professional – needs time. Even if he wasn’t injured, he still lacks the rhythm.”

he 20-time Grand Slam champion suffered a career record he won’t want to repeat in his loss to Davidovich Fokina in Monte Carlo, getting broken nine times – his most in a best of three match. Corretja said Djokovic needed more chances to save break points before going into the French Open to prevent a repeat of his nine breaks of serve.

“He needs those moments again where he has break point against him and has to decide how to serve at that moment”, the retired Spaniard continued. And with the Serb having played just a handful of matches so far this year, Corretja also said he needed to re-familiarise himself with the feeling of bouncing back physically after a week’s worth of matches.

He added: “Novak has to endure the feeling that his heart is pounding out – and then recover quickly. He will have to make a lot of physical effort to strengthen his legs. On clay it depends a lot on the sliding, rallies of maybe 30 to 40 shots are the order of the day.”

With Djokovic still alive in the Serbia Open and set to compete at both the Madrid and Rome Masters before the French Open, he still has the time to get the ten to twelve matches Corretja outlined but will face a tough test in doing so with ‘King of Clay’ Rafael Nadal set to return from injury in Madrid and two-time former champion Andy Murray also taking a wildcard into the event, also eyeing a chance at playing in Rome.