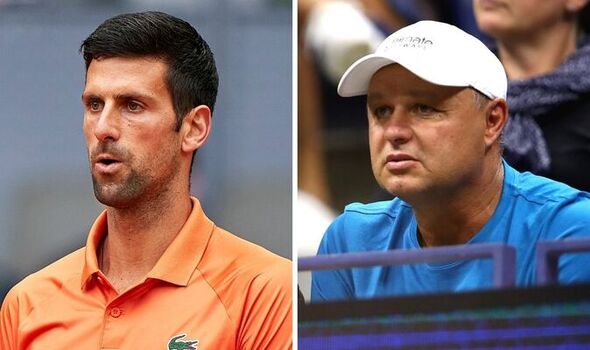 Novak Djokovic has responded to his ex-coach Marian Vajda’s new link-up for the first time. The world No 1 announced he had parted ways with his coach of 15 years in March, and Vajda is already working with a new charge in world No 47 Alex Molcan but admitted he had not told Djokovic about the new partnership.

Djokovic and Vajda made the decision to split at the end of 2021, making the news public two months ago. The Slovakian coach has since struck up a new partnership with compatriot Molcan, though revealed in a press conference on Tuesday that he did not inform the Serb of his new partnership, instead telling his sole remaining coach Goran Ivanisevic.

But the world No 1 has now sent a message to his long-time friend and mentor after the news of his work with the 24-year-old was announced, commenting on an Instagram post shared by Vajda. “Pomeeee,” he wrote with a clapping emoji. “Good luck to both of you.. Except when you play against me,” he joked, adding a laughing emoji.

Vajda held a press conference in Bratislava on Tuesday to announce the news, in which he also touched on his split with Djokovic. “Novak and me are still friends, it was an amicable split,” he told reporters before admitting he had kept his partnership with Molcan from his former charge.

“I told Goran that we will practise together in Paris. I did not tell Novak (about working with Molcan), but I did tell Goran, so I am sure Novak knows.” The 57-year-old also admitted that he felt as though the Serb had “chosen” former Wimbledon champion Ivanisevic to be his sole coach, admitting he didn’t ask to stay on for Grand Slams only.

“It was a combination of various reasons: we have been together for a really long time and his decisions showed that he wanted to focus on Grand Slam tournaments – that is why he might think that it is not ideal to have so many people in his team. He wanted to reduce it and have only one coach,” he explained.

“I don’t know for sure, because I never asked him, but I assume from my analysis of his tournament schedule, that he wanted to reduce his team, and he chose Goran Ivanisevic. It did not make sense for a coach to coach him only him on Grand Slams, because a coach needs a long-term plan.”

And when asked whether the pair had discussed a plan that would see Vajda – who wanted to travel less – only joining him at the four Grand Slam tournaments, the Slovak admitted: “I don’t know, because I never asked.”