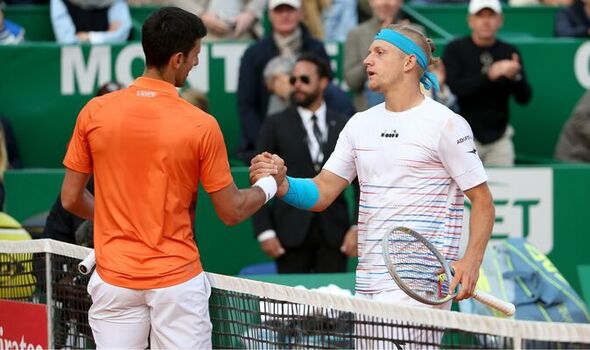 Alejandro Davidovich Fokina is setting his sights high after upsetting Novak Djokovic in Monte Carlo. The world No 46 has now gone on to make the semi-finals of a Masters 1000 for the first time and is hoping to follow in the footsteps of his compatriot Rafael Nadal, who has won a record 11 titles at the tournament.

Davidovich Fokina scored the win of his young career when he took down world No 1 Djokovic 6-3 6-7(5) 6-1 in the second round of the Monte Carlo Masters, in what was the Serb’s first match after receiving a bye. He has since gone on to back up the result, making it into his maiden semi-final at Masters 1000 level where he will face Grigor Dimitrov on Saturday.

Following his career-best run in Monaco, the 22-year-old Spaniard is now aiming high as he admitted he wishes to replicate his compatriot Nadal’s achievements at the Monte Carlo Country Club, with the world No 4 holding a record 11 trophies from the event. “This is a tournament that I have always liked,” the world No 46 said after reaching the last four.

“I have seen the great moments of Rafael Nadal and the victories of him, and I thought that I wish one day I could be the one who lives that.” It was another three set battle for Davidovich Fokina on Friday, as he came from a set down to defeat recent Indian Wells champion Taylor Fritz in the quarter-final 2-6 6-4 6-3 for his best-ever showing at a Masters.

JUST IN: Zverev ‘shouldn’t be on court’ in scathing Kyrgios and Medvedev claim

Speaking about his achievement of making it to the last four in Monte Carlo, he said: “Last year I reached the quarterfinals and I retired. It was a sad thing. Now I have had my first game on centre court, with the public, and the feeling is very different.

“I had many options to break the serve in the first set but I thought that sooner or later my moment would come. The last games of the second set were very important, key in the match.”

Davidovich Fokina also admitted his round two victory over the 20-time Major champion had given him the confidence to go on and defeat more tricky platers in Fritz and his third-round opponent David Goffin, a former top-ten who is fresh off the back of winning the title in Marrakech. “Beating Djokovic gave me a lot of confidence because you don’t always beat the number one in the world. Then I had to deal with all those emotions,” he said.

“Then the match against Goffin who had won in Marrakech and who is a great player was not easy. I feel stronger physically and mentally and I’m enjoying myself.” He has another tough opponent in Dimitrov next, a former world No 3 who won the ATP Finals in 2017. Davidovich Fokina leads their head-to-head 1-0, winning their sole match at another clay masters in Rome last year 6-4 7-6(2).