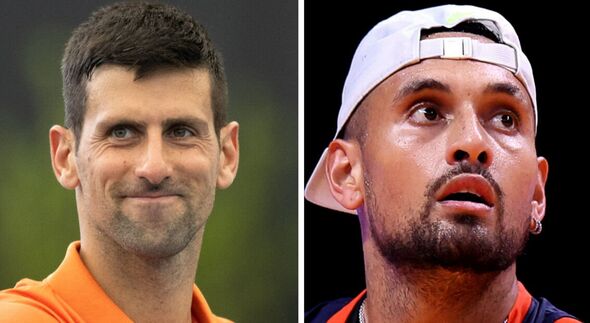 Serbian tennis star Novak Djokovic has ‘made an offer’ to tennis rival Nick Kyrgios ahead of this month’s Australian Open. The pair formed a strong friendship last year and now Djokovic has offered to help the Australian return to fitness with a warm-up match.

Kyrgios and Djokovic have not always seen eye to eye throughout their careers but their relationships blossomed during 2022 starting at last year’s Australian Open. When Djokovic was deported on the eve of last year’s tournament, for his anti-vaccination status during the Covid-19 pandemic, Kyrgios was one of those who spoke out in favour of his rival.

The pair’s relationship then became stronger during last year’s Wimbledon competition with 21-time Grand Slam champion Djokovic going as far to describe their relationship as a ‘bromance’. The Serbian was however unforgiving to his new friend in the final beating Kyrgios 4–6, 6–3, 6–4, 7–6.

Kyrgios received some criticism when he pulled out of the United Cup team competition at the 11th hour due to an injury and also the Adelaide International leaving him short on preparation for the Australian Open starting on January 16. Kyrgios’ manager, Daniel Horsfall, told The Age and the Herald that they plan to travel from Canberra to Melbourne on Thursday next week.

He said the world No.22 was making “good progress” and is “no doubt at all” for the first Grand Slam tournament of the season. “We are very excited and working every day to make sure we’re ready for the Australian Open,” Horsfall said.

“A lot of people were upset after he pulled out of the United Cup, but I hope they now realise the injury is genuine. I wish more people would ask questions before putting in their two cents.”

The organisers of the Melbourne exhibition event, the Kooyong Classic, have offered Kyrgios a place in their tournament while Djokovic could also help the Australian with a warm-up match.

Kyrgios will be playing in both the singles and doubles tournaments at his home Grand Slam. Last year the all-Australian pair of Kyrgios and Thanasi Kokkinakis won their first Grand Slam doubles title and they will be hoping to defend their crown at Melbourne Park.

“There’s nothing better, to play the Australian summer is one of my favourite times of the year,” Kyrgios said. The Australian has also hinted at wanting to play alongside Djokovic in a doubles tournament later this season