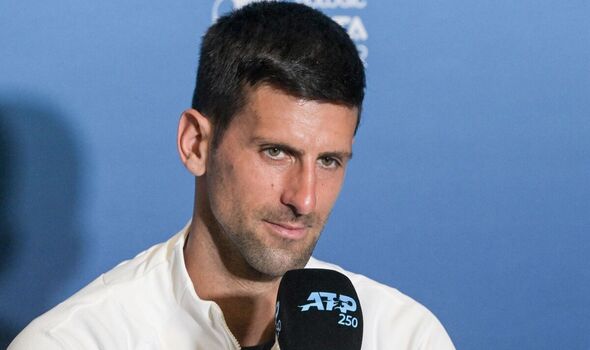 Novak Djokovic gave his verdict on a potential second ban for Russians at Wimbledon this year and made it clear that he wanted to see the likes of Daniil Medvedev back at the All England Club in summer. Players from Russia and Belarus were banned from last year’s tournament in response to the war in Ukraine, and speculation is building over whether the decision could be repeated in 2023 as the conflict continues.

There has been talk over a second ban for Russians and Belarusians at Wimbledon this year, with the All England Club expected to make a decision in time for their annual spring press conference. The likes of Belarusian WTA world No 5 Aryna Sabalenka have already shared their hopes to return to the grass-court Grand Slam this year, and reigning champion Djokovic has now had his say.

The world No 5 has become unbeatable at SW19, winning seven titles at Wimbledon overall including the last four editions of the event. And Djokovic made it clear on Tuesday that he didn’t want to see players from either nation banned from Wimbledon or any other tournament in 2023.

“Of course, of course, absolutely,” the 21-time Major champion said when asked whether he wanted to see every player able to compete at every Grand Slam. Djokovic was also asked specifically about Medvedev after the Russian shared his desire for bans to end at individual tournaments.

JUST IN: Novak Djokovic ‘surprised’ by crowd after first match win in Australia

The Serb added: “I hope he and other Russian, Belarusian players will be able to play everywhere.” It comes after Russia and Belarus were banned from this week’s inaugural United Cup – a brand new mixed-gender team tournament.

Medvedev has already discussed Russia’s ban from the event, admitting that he could understand why the nation was unable to compete in team tournaments while sharing his desire to be back at every individual contest, including the likes of Wimbledon.

“So far I haven’t heard anything, and I completely understand why we are not playing Davis Cup or United Cup and team competitions where we would represent our country,” the world No 7 said when asked whether he knew if Russia would be allowed to return to team events this year.

“Yeah, hopefully I can play the individual events, and as I said many, many times last year, I play what I can play, so here I can play Adelaide, and I’m really happy about it, and I want to show my best tennis.”