Why was Djokovic’s visa cancellation overturned by a court? It was all a matter of time

The main basis that Judge Anthony Kelly overturned the federal government’s decision to cancel Novak Djokovic’s visa was the tennis champion wasn’t given enough time to respond to the notice of cancellation.

Judge Kelly said the visa cancellation was unreasonable because:

The transcript of Novak Djokovic’s interview with border officials after he landed in Melbourne reveals the key moment at the heart of the court orders to quash the visa cancellation.

A Border Force official told Djokovic about 5.30am last Thursday morning he could have several hours to consult advisors before he had to sign any forms relating to the cancellation of his visa.

The Minister for Home Affairs ultimately agreed that because Djokovic wasn’t given the time as promised, the visa cancellation was unreasonable.

Here’s the exchange (which you can find on the court website):

INTERVIEWER: I have already served you with the notice of intention to consider cancellation and at the moment you need – what have you have advised me is that you need rest and up to 8/8.30. And that’s when you would be able to speak to your solicitor again and get some more information.
DJOKOVIC: Yes.
INTERVIEWER: So that’s absolutely fine, because I have spoken to my supervisors and they’re more than happy to – – –
DJOKOVIC: Okay great.
INTERVIEWER: for you to have rest. So any more questions?
DJOKOVIC: No more questions for now

Novak Djokovic could be able to have a three-year entry ban waived if Immigration Minister Alex Hawke goes ahead with using his personal power to cancel the tennis champion’s visa.

Kelly said: “In a view, the stakes have risen rather than receded.”

The Migration Act provides that a person whose visa has been cancelled may be subject to a three-year exclusion period that prevents the grant of a further temporary visa.

But this exclusion period would be considered as part of any new visa application and it can be waived.

Mr Hawke has four hours to decide whether to exercise his “personal power of cancellation” under section 133C(3) of the Migration Act and sources confirmed he is now considering it.

Nick Kyrgios’ Australian Open campaign is in major doubt after he returned a positive COVID-19 test. 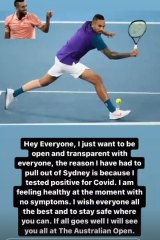 Kyrgios was spotted training in Sydney on Monday but was a late withdrawal from the Sydney Tennis Classic.

The 26-year-old revealed on social media soon after that he received a positive COVID-19 test.

“Hey everyone, I just want to be open and transparent with everyone,” Kyrgios wrote on an Instagram story.

The reason I have had to pull out of Sydney is because I tested positive for COVID. I am feeling healthy at the moment with no symptoms.

“I wish everyone all the best and to stay safe where you can.

“If all goes well I will see you all at the Australian Open.”

A law expert says the Minister for Immigration has the power to cancel Novak Djokovic’s visa again without applying natural justice, but they expected the case to go back to court if that occurred.

University of Sydney Law School’s Professor Mary Crock, who specialises in immigration law, said the immigration minister has broad powers under section 133 of the Migration Act to cancel the tennis champion’s visa again.

The minister could decide a reason as broad as that it’s in the public interest. 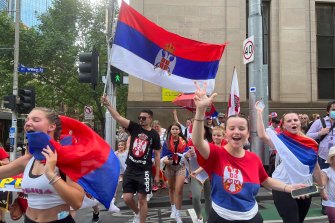 Serbian fans celebrate the news that Novak Djokovic had his visa cancellation overturned and was being released from detention.Credit:Ashleigh McMillan

But the professor expected the case would go right back to court if that occurred to consider all the substantive issues that were before the court today already.

“The issue that would go back into court is the question of whether there were any grounds on which his visa could be cancelled,” Professor Crock said.

“It’s very, very hard to argue to win those cases.”

Professor Crock said people have “very few rights” when they first enter a country and are in immigration clearance.

“Your right to know what’s going on is fairly limited. You’re usually not allowed to communicate with the outside world,” she said.

“That’s not unique to Australia either, immigration control is a rather opaque process in many countries.”

As The Age and Sydney Morning Herald’s foreign affairs and national security correspondent Anthony Galloway reported earlier, the effect of cancelling the visa again would mean Djokovic would not be allowed into Australia for another three years.

Professor Crock said that situation would be “beyond embarrassing” for Australia.

In today’s developments, a separate minister – the minister for home affairs – conceded on all the procedural grounds and agreed to the orders that the cancellation would be overturned.

This meant the court did not make a decision.

“The significance of that is that it doesn’t give the court any scope to make a ruling on what happened and most particularly doesn’t allow to the court to make any comments about the substantive issues,” Professor Crock said.

Notably, this would be confirming what exactly the Australian Technical Advisory Group on Immigration’s (ATAGI) advice is for people who claim, like Djokovic, they have a medical exemption from being vaccinated because they were infected with COVID-19.

“As the judge said ‘What else did he have to do, what could he have done?’”

The former head of the ATAGI and still serving member, Professor Allen Cheng, told state political reporter Paul Sakkal a short time ago that exemption for prior infection never applied to overseas travellers.

He did not know whether that advice was ever published and made available to the public.

Novak Djokovic’s treatment when he arrived in Australia turned out to be highly significant in today’s court hearing.
This evening, the court released a full transcript of his conversations with Border Force staff in formal interviews (which you can find here).

Below is a section from the beginning of his interview just after midnight on Thursday.

Paul Sakkal, state political reporter for The Age, is at the Melbourne office of Novak Djokovic’s lawyers.

His lawyers confirmed in the court hearing earlier that Djokovic was with them. 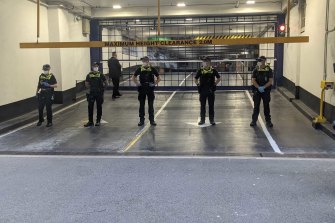 About a dozen Victoria Police officers and several private security guards at the entrance to Novak Djokovic’s lawyer’s carpark.Credit:Paul Sakkal

Sakkal says there is now about a dozen Victoria Police officers and several private security guards at the entrance to the firm’s carpark.

The officers arrived to the carpark gate about 6pm.

It is believed Djokovic is inside the CBD tower above the carpark, which is off King Street on the western side of Melbourne’s CBD.

The former chair of Australia’s top vaccination body – whose advice underpins Novak Djokovic’s bid to play the Australian Open – says prior COVID-19 infection has never been a valid reason to enter Australia as an unvaccinated person.

Djokovic’s lawyers argued Djokovic had a valid exemption because an Australian Technical Advisory Group on Immigration document stated an infection in the last 6 months may be grounds for a medical exemption. 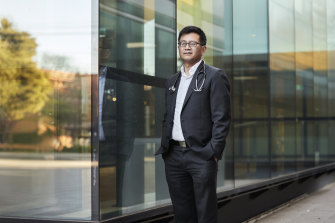 But Professor Allen Cheng, who remains an ATAGI member after serving as chair, said this directive was for people who live in Australia to be exempt from vaccine mandates in the country.

He said the exemption for prior infection never applied to overseas travellers.

This is because it was difficult to prove the veracity of medical documentation from overseas, and because different countries had different policies on prior infection exemption.

Professor Cheng said ATAGI had many discussions during the pandemic about the topic of prior infection and had continually made recommendations to the federal government that it should not be an exemption for international arrivals.

“It wasn’t because of tennis players that that rule came about,” he said.

“Having had infection for the purposes of crossing the border is not one of those [reasons for an exemption].”

Potentially explaining the confusion to this point, Professor Cheng said he didn’t know whether the advice against exemptions for international arrivals who had COVID was ever published and available to the public.

“I’m not sure if it was communicated. I assumed it was; we understood that be the rule, but where exactly it was published, I’m not sure.”

Professor Cheng’s comments to The Age align with letters to Tennis Australia from senior Commonwealth officials in late November stating prior infection was not a valid exemption.

However, the source said the federal government did not believe he had a medical exemption and could cancel his visa again on this basis while affording Djokovic procedural fairness.

Our poll on what you’re thinking is still alive and kicking if you want to have your say below:

Elated Serbian fans outside the Federal Circuit Court and Family Court in Melbourne have sparked back to life following news that Novak Djokovic’s visa cancellation had been quashed.

Erupting in cheers when word of the verdict spread, around 100 people amassed in the Melbourne CBD are continuing to dance, drum and chant “Nole, Nole, Nole” (Djokovic’s nickname) for their champion. 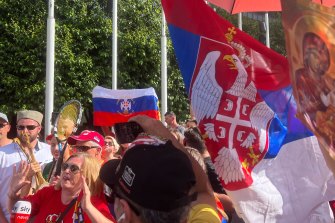 Serbian fans outside the Federal Court of Australia building in MElbourne’s CBD.Credit:Ashleigh McMillan

Some fans driving past the celebrations are providing a chorus of car-horn honks, with Serbian flags flapping out their car windows.

It comes after a long day in the sun for many of the assembled, having set up on pavement early on Monday to sing traditional Serbian songs and listen to the live-streamed hearing via a megaphone.

Slobodan Bendjo, who works in Collins Street, said the decision had reinforced his trust in Australia’s courts. 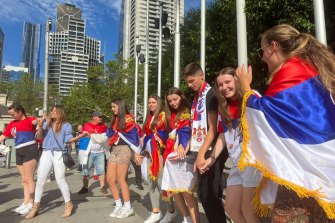 “I feel great because I just realised that the Australian legal system is working – it’s evidence-based, it’s about justice and it’s not influenced by any politicians,” Mr Bendjo said.

“People here, they’re all happy, and you feel safe and secure in this country once you realise that the legal system is functional.”

Why was Djokovic’s visa cancellation overturned by a court? It was all a matter of time

The main basis that Judge Anthony Kelly overturned the federal government’s decision to cancel Novak Djokovic’s visa was the tennis champion wasn’t given enough time to respond to the notice of cancellation.

Judge Kelly said the visa cancellation was unreasonable because: