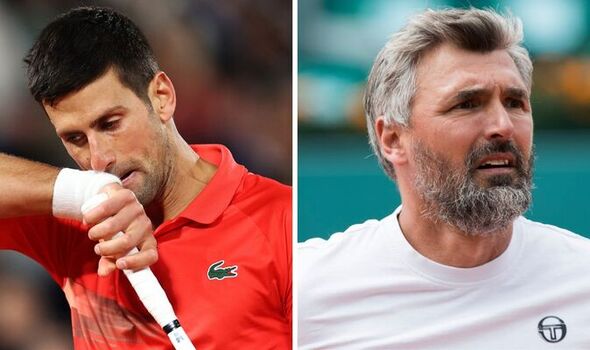 Novak Djokovic’s coach has admitted he “can’t sleep” following the Serb’s French Open quarter-final loss to Rafael Nadal. The world No 1 was the defending champion in Paris but was ousted by his long-time rival in a four-set triller and Goran Ivanisevic has opened up on the trouble it has caused him.

Djokovic was playing his first Grand Slam tournament since last September and was the defending champion in Paris but suffered an early exit at the hands of Nadal, as the 13-time champion won their 59th meeting 6-2 4-6 6-2 7-6(4). The world No 1’s body language was noticeably off during the four-hour-and-12 minute battle, and his coach has now admitted he has been unable to sleep since the match.

Asked if he had picked up on the 35-year-old’s negative demeanour, Ivanisevic told Tennis Majors: “Yes, everyone noticed. I do not know [why], we have not spoken yet. That is why I am so troubled by this match, I can’t sleep.”

The two-time French Open champion led by 5-2 in the fourth set and had two set points but Nadal came storming back to force a tiebreak and managed to close out the match. And Djokovic’s coach admitted it was tough to think about what would’ve happened if the top seed managed to successfully force a fifth set.

JUST IN: Murray suffers defeat as Surbiton run comes to an end before Wimbledon

“What would happen had he won the fourth set, nobody knows, but that is just good old ‘what if’,” he explained. “He had two set points: the first one was an easy backhand unforced error, on the second he approached the net with the ball in the middle of the court, so Rafa passed him.

“Maybe it would have been different, maybe it would not, but I still do not understand the body language and the lack of energy. Novak had too many ups and downs, while Rafa was consistent and he absolutely deserved to win that match.”

As well as touching on Djokovic’s “troubling” body language, the former world No 1 also shared the tactical reason he believed the Serb failed to trouble his rival during the match, apart from his comeback from 0-3 down in the second set to take it 6-4. Ivanisevic added: “I have read many comments and analyses emphasising Rafa’s offence with a forehand down the line.

“That is correct, but Novak’s backhand crosscourt was not as deep and penetrative as it usually is – a lot of the times, the ball landed in the middle of the court or in an ideal spot for Rafa to attack. Once Novak started using his backhand down the line more, the momentum in the second set changed, and then his crosscourt backhand became stronger as well. Rafa used what Novak gave to him – he is the king and an owner of this court, and he does not allow you to have lapses, you pay for them immediately.”