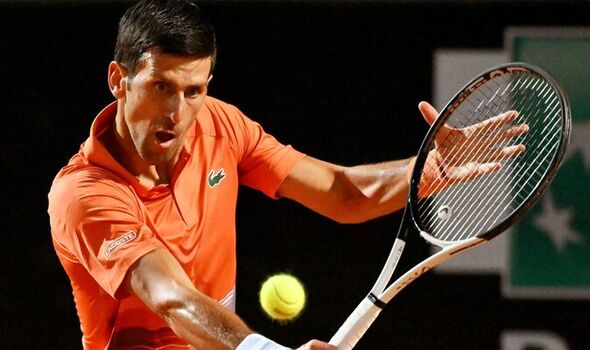 Novak Djokovic reached a huge milestone in his career as he scored his 1000th match win over Casper Ruud in the Italian Open semi-final. The world No 1 won through 6-4 6-3 in an hour and 42 minutes and will now face Stefanos Tsitsipas for the title.

It was a third career meeting between Djokovic and Ruud, with the world No 1 leading their head-to-head 2-0, including a win in the Italian Open semi-finals two years ago. And the Serb was even more motivated this time around, bidding for a landmark 1000th career win.

The top seed got off to a fast start, taking a 4-0 lead in 23 minutes with the double break. Ruud started to settle into the match and served out two love-holds before setting up his first break point of the match when Djokovic was serving for the set, getting the break as the Serb sent a ball long.

He held on to force the five-time former champion to serve it out once again, and this time Djokovic was able to close out the set 6-4 in 55 minutes. Ruud carried his improved form into the second set, with things neck-and-neck until 3-3 when the 34-year-old set up the first two break points of the set.

JUST IN: Lopez hits back at Djokovic and Zverev for Madrid Open criticism

Ruud saved both and was dragged into a long game, with Djokovic setting up two more break points and converting the fourth in a game that lasted more than eight minutes. And the world No 1 failed to drop a game for the rest of the match, winning the last three and breaking Ruud for a final time to close out his 1000th match win, 6-4 6-3.

The 23-year-old told Djokovic he was “glad to be part of your history” during their handshake at the net, as the world No 1 book a place in his 12th Italian Open final. He joins Jimmy Connors, Roger Federer, Ivan Lendl and Novak Djokovic as the only men in the Open Era to surpass 1,000 career wins.

Djokovic will now face Tsitsipas in tomorrow’s final, in what will be a repeat of last year’s French Open final. It will be their ninth meeting and the first since the Greek blew a two-set lead in his maiden Grand Slam final in Paris 11 months ago.

The world No 5 will be out for revenge and hoping to add a maiden title in Rome to his haul of Monte Carlo Masters trophies, having successfully defended his title last month. Meanwhile, Djokovic will be bidding to pick up his first title of the season.