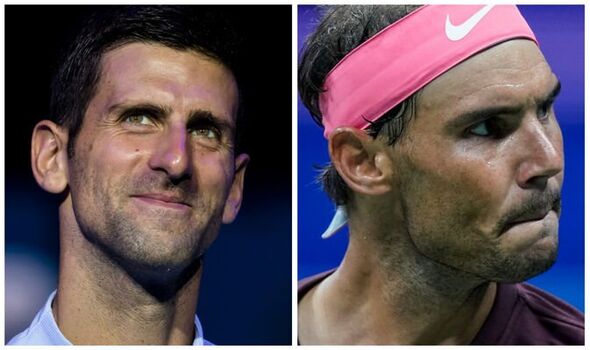 Novak Djokovic and Rafael Nadal have been a fired warning by the fitness coach of Dominic Thiem who has helped the Austrian back from two wrist injuries. Thiem won the US Open two years ago and has also reached three other Grand Slam finals during his career, but has struggled with injuries over the last 16 months.

The 29-year-old suffered two wrist injuries last year but is finishing the year with a flourish reaching the last four in the ATP 250 event in Gijon earlier this month. This week the Austrian has been competing in the European Open taking place in Antwerp and beat top seed Hubert Hurkacz in today’s close quarter-final winning 3-6, 7-6, 7-6.

He will meet American Sebastian Korda in the semi-final tomorrow. Thiem has been working with physical conditioning coach Jez Green who has worked with British stars Andy Murray and

Thiem’s time out injured has seen the former world number three drop to 132nd in the world rankings. However, the Austrian looks on his way back to form and Green believes the 29-year-old can challenge the game’s powerhouses Djokovic and Nadal over the next five years.

Green added: “You have to think the real Dominic has a great chance at Roland Garros, but all the slams are an opportunity for him. He’s very fresh and has a very big motivation. He can play for another five years. I’m sure Novak and Rafa don’t want to see a fully prepared Dominic Thiem.”

The Austrian injured his wrist in June last year at the ATP 250 event in Mallorca and didn’t play for the rest of 2021 missing the chance of defending the US Open title he won the previous year. This season he was forced to miss the Australian Open due to a second wrist injury and his recovery has continued with first round exits at the French and US Open.

Green added: “He’s come a long way from injury, but we fully believe in the process. In a matter of months, he injured his wrist twice, the first of which was in June last year. We did a lot of fitness back then, by December he was pretty ready. He went to Dubai and he progressed well there, but then he really couldn’t play in Australia.”