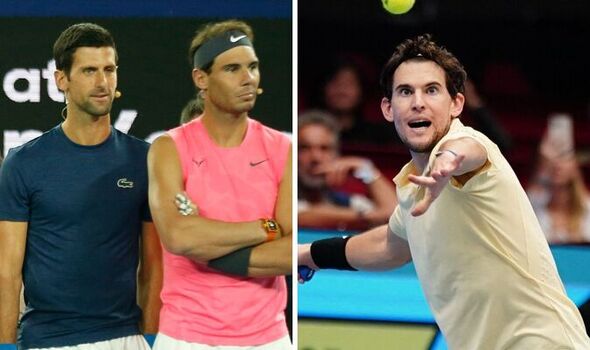 Dominic Thiem has fired a warning to the likes of Novak Djokovic and Rafael Nadal as he claimed he would be ready to fight them for Grand Slam titles next year. The former world No 3’s 2022 season came to an end with defeat to Daniil Medvedev in Vienna but Thiem is already confident that he will be back to his best in 2023.

Thiem’s comeback from a wrist injury has been gaining momentum in recent months, with the 29-year-old making back-to-back semi-finals in Gijon and Antwerp recently, where he downed world No 11 Hubert Hurkacz. His 2022 season came to an end on Thursday as he lost to Medvedev in the second round of the Vienna Open but Thiem has already proven that he will be a frightening prospect on the tour in 2023, and is full of fighting talk ahead of next season.

“Since Bastad, I have the feeling that I can compete with the best again,” he told Kleine Zeitung, referring to his first quarter-final run of the season back in July where he beat world No 20 Roberto Bautista Agut en route. And the former world No 3 said he knew he was capable of beating anyone to win a Major again, something that will come as worrying news for Djokovic and Nadal in their race to win the most Grand Slam titles.

“I have the belief that I can do it. If not, I would give up my career,” the current world No 113 said. “I was at the top, among the top three in the ranking. And I do have the feeling that I am capable of fighting again for the big titles, for the Slams, and to beat anyone. Otherwise, all this hard work would be meaningless to me. I hope next year I can do it.”

Thiem also confirmed that his season had come to an end as he ruled out playing next week’s Paris Masters, where he had received a wildcard into the qualifying event. Instead, he is preparing to become a threat at the Grand Slams as he prepares for a lengthy training block over the off-season.

Discussing his plans, the Austrian said: “I will put full focus on the preparation so that I will be fully ready in early 2023. At the beginning of December I will fly to the Emirates, do the preparations there and from there to Australia.”

Thiem’s fitness trained Jez Green – who is now working with Emma Raducanu – also warned the rest of the ATP Tour that the 17-time title winner would be back to his best for 2023. “He’s fresh, he’s ready, he’s fit and he’s pain-free. With another really big training block in November and December, I think he will be at another level by Australia,” he wrote in a Tennishead column.

“He will have full power and be even stronger, fitter, and faster than ever before. He’s never really done a strength program scientifically, so we’ve done a lot of strength work in order to make him much more explosive. I think he’s going to end up looking a little different than before, although maybe not dramatically.  It’s not going be dramatic, but people will say: ‘Hey, he looks strong’. Everyone around is starting to notice this body is changing.”