Tennis star Novak Djokovic has apologised for an “error of judgement” in taking part in a media interview while he knew he was COVID-19 positive and conceded his agent made an “administrative error” on his travel forms.

Djokovic said his agent “sincerely apologises” for ticking the incorrect box on his Australian Travel Declaration, which meant he falsely claimed he had not travelled anywhere in the 14 days prior to his arrival in Australia despite being in Spain. 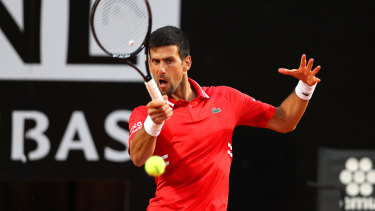 Novak Djokovic has admitted he attended an in-person interview and photoshoot while knowingly COVID-positive. Credit:Getty

The Serbian tennis star has been criticised for more than 24 hours over photos that showed he had been out in the community in the days immediately after contracting COVID-19.

In a lengthy post on Instagram, Djokovic said he received a positive result on the night of December 17 after submitting the test the day before.

He said he then “felt obliged” to go ahead and conduct an interview with French media organisation L’Equipe on December 18 because he “didn’t want to let the journalist down, but did ensure I socially distanced and wore a mask except when my photograph was being taken”.

“While I went home after the interview to isolate for the required period, on reflection, this was an error of judgement and I accept that I should have rescheduled this commitment,” he said.

Djokovic said he was making the social media post to address the “continuing misinformation about my activities and attendance at events in December in the lead up to my positive PCR COVID test result”.

“I want to emphasise that I have tried very hard to ensure safety of everybody and my compliance with testing obligations. I attended a basketball game in Belgrade on 14 December after which it was reported that a number of people tested positive with COVID-19,” he said.

“Despite having no symptoms, I took a rapid antigen test on 16 December which was negative, and out of an abundance of caution, also took an official and approved PCR test on that same day.

“The next day I attended a tennis event in Belgrade to present awards to children and took a rapid antigen test before going to the event, and it was negative. I was asymptomatic and felt good, and I had not received notification of a positive PCR test result until after that event.

“The next day, on 18 December I was at my tennis centre in Belgrade to fulfil a long-standing commitment for a L’Equipe interview and photoshoot. I cancelled all other events except for the L’Equipe interview.”

Djokovic also confirmed that his Australian Travel Declaration was submitted by “my support team on my behalf – as I told immigration officials on my arrival”.

He said his agent “sincerely apologises for the administrative mistake in ticking the incorrect box about my previous travel before coming to Australia”.

“This was a human error and certainly not deliberate. We are living in challenging times in a global pandemic and sometimes these mistakes can occur.

“Today, my team has provided additional information to the Australian Government to clarify this matter.”

Immigration Minister Alex Hawke was to make his decision on whether to use his personal power to deport the Serbian star on public health grounds as early as Wednesday, but Djokovic’s lawyers submitted additional information, which will draw out the process longer than expected.

A spokesperson for Mr Hawke said on Wednesday the Serbian tennis star’s lawyers had “recently provided lengthy further submissions and supporting documentation said to be relevant to the possible cancellation of Mr Djokovic’s visa”.

“Naturally, this will affect the timeframe for a decision,” they said.