BBC commentator Todd Woodbridge has warned Nick Kyrgios that he may receive “a letter in his locker” after wearing a red cap and shoes during his Wimbledon fourth-round victory over Brandon Nakashima. The Australian may have broken dress code rules as the All England Club rules stipulate that only pure white must be worn and that off-white or cream is not even permitted.

Additionally, players’ shoes must be white with no large brand logos and any undergarments must also be white. However, Kyrgios put on his red shoes and cap after defeating the American 6-4 4-6 6-7 6-3 2-6. Woodbridge believes that he could be warned for breaking dress code rules.

Sue Barker posed the question to Woodbridge and Tim Henman. “Yeah that is going to be an interesting one,” Henman said, before Woodbridge added: “Do you think he will get a letter in his locker?”

Henman joked in his reply: “He might get a little quiet word in his ear, he was so well-behaved, no warnings, no fines, we have got to make some money somewhere! Maybe it is the cap and the shoes.

JUST IN: Nick Kyrgios and girlfriend Costeen pack on PDA at Wimbledon training 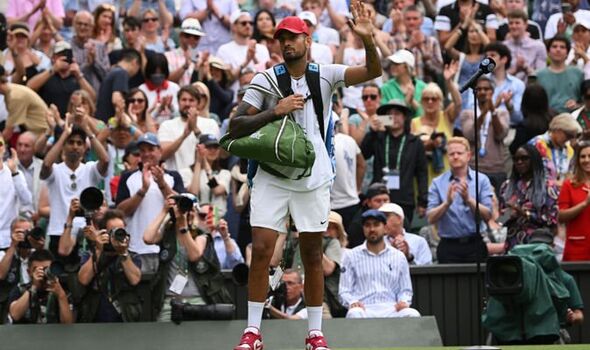 “I think all credit to him, this is a match where he came in as the favourite, there was much more pressure on him. It is a great opportunity, of course he is aware of where he is in the draw and how things are opening up so I am a fan of the way he has been playing. When he goes out there and is serving like this, was it 35 aces in the end? It is a great opportunity and it is a great story that’s building momentum.”

Barker added that Kyrgios did not sign any autographs and wore red, and there currently has been no comment from Wimbledon as to whether he will receive any punishment for wearing red as he left the court. 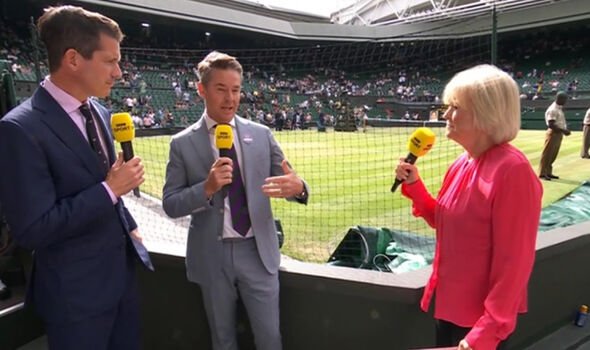 The Australian has been fined twice throughout the tournament, £8,200 after his first-round match with Brit Paul Jubb and £3,300 after his third-round win over Stefanos Tsitsipas.

Woodbridge was impressed with how Kyrgios battled hard to defeat Nakashima. “When he more or less gave his service game away at the end of the fourth I got really concerned,” Woodbridge said. “Not going to serve in the fifth, he had given away the advantage.

“We spoke about grinding and how important it is to be able to grind out a couple of points, and at the beginning of the fifth that was when he really stood up, he worked hard, chased a lot of balls around the court and you think ‘OK he is engaged again, he is switched on’ and moving forward to go deeper in the tournament, that was the best sign I saw from him.”