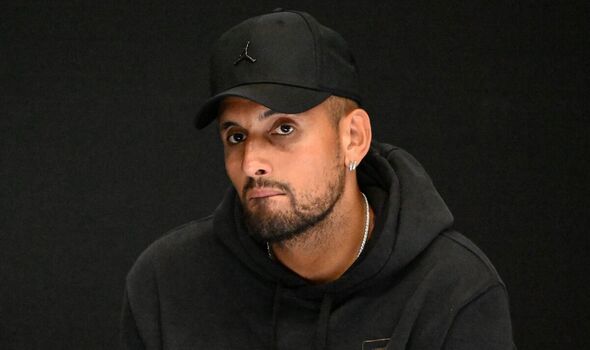 The Aussie No 1, who will need minor surgery to remove a cyst from his left knee, said: “I’m devastated, obviously, it’s my home Slam and going into this event as one of the favourites, it’s brutal. Bad timing. Injuries are part of the sport.”

It is another huge blow for the first Grand Slam season where 2022 champion Ash Barty is not defending her title after retiring last March while Serena Williams and Roger Federer have also ended their careers.

And Kyrgios is the latest star of the fly-on-the-wall Break Point to pull out injured following world No.1 Carlos Alcaraz, Ajla Tomljanovic and Paula Baudosa

The Wimbledon finalist had to pull out of warm-up events because of the knee injury and used an exhibition match against Novak Djokovic at Melbourne Park on Friday night as a fitness test.

But in an emotional press conference today, world No.21 Kyrgios said: “I wanted to give myself hope, I thought I had a chance. It doesn’t feel good. It’s constant. When I finish a session or finish a match, it’s just constant throbbing. Barely had a good night’s sleep the last four, five nights. It’s just been throbbing. It’s an impact, so every time I land on serve or push off my serve, you can see on the side of my knee there’s like a little lump. That lump will eventually just get bigger and bigger. There’s pressure on my knee, obviously hinders my movement. Yeah, the only real way to get rid of it is to open up and then just get rid of it.”

His physio Will Maher said “There’s a parameniscal cyst growing in his left meniscus, which is the result of a small tear in his lateral meniscus. It’s not a significant injury in the sense that it’s going to be career-threatening or anything like that. To Nick’s credit, he did try everything, to the point even last week he was having a procedure called a fenestration and drainage where they use a syringe to try and drain the cyst, which Nick has some pretty gruesome photos of. I’m sure he’ll probably share them later.

“In terms of making it worse, it absolutely could get worse. The very small tear he has on his meniscus could turn into a much more complicated one, and he would end up losing a large chunk of his meniscus, which would affect his long-term prognosis.

Kyrgios will go under the knife in Canberra next week with the aim of returning to action at the Indian Wells Masters in March.

“I’m not doubting I will be back to my full strength and playing the tennis I was playing prior to this event,” he said. “Yeah, I’m devastated obviously. It’s like my home tournament. I’ve had some great memories here. Obviously last year winning the title in doubles and playing the best tennis of my life probably. Then going into this event as one of the favourites, it’s brutal. All I can do now is just look forward, do what I need to do and come back.”

The Aussie No.1 had been in the news on the opening day of his home Grand Slam even before calling his afternoon press conference to pull out.

After starring in the opening episode of the Netflix Break Point series, a picture of Kyrgios and his girlfriend Costeen Hatzi riding in central Melbourne on an e-scooter without wearing helmets has caused a social media storm. Victoria road rules state helmets must be worn but the helmet is seen attached to the scooter.

Victoria Police said: “Police are aware of an online image of a man riding a scooter in Melbourne’s CBD without a helmet, Although it’s unclear when the image was taken, Melbourne Highway Patrol, now that they’re aware, will make enquiries in relation to the incident.”

World No.21 Kyrgios, who had been scheduled to play Russian Romain Safiullin in the night session tomorrow, is already facing a February court hearing over allegations he assaulted his former girlfriend Chiara Passari in 2021.