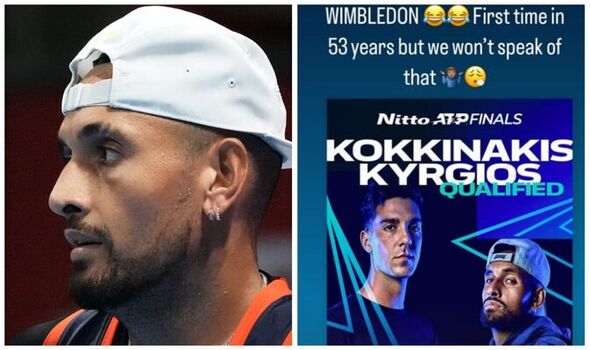 Nick Kyrgios had a public dig at Wimbledon organisers after qualifying for the doubles event at the ATP Finals, but not the singles event. The Australian, who was finalist at this year’s Wimbledon tournament, feels hard done by after missing out on any qualification points for the event.

This year’s competition at the All England Club didn’t carry ranking points for the first time in 53 years after deciding to ban Russian and Belarusian players from the tournament due to the war in Ukraine. Kyrgios has obtained 1,870 ranking points this season leaving him ranked 22nd in the official world rankings.

However, his ranking would have been substantially improved by the 1,200 ranking points given to the beaten finalist at Wimbledon. To make matters worse Novak Djokovic, who beat him 4–6, 6–3, 6–4, 7–6 in the final, was still given a qualification place for the ATP singles finals as a major winner.

Kyrgios has however qualified alongside partner Thanasi Kokkinakis for the doubles tournament at the ATP Finals in Turin next month. Despite qualifying the Australian showed his frustration at missing the singles tournament. Posting on Instagram he said: “Should of been in singles as well… (but) no points at Wimbledon. First time in 53 years but we won’t speak of that.”

Doubles partners Kokkinakis and Kyrgios won the Australian Open earlier this year, the first all-Australian pair to win the title in 25 years. They qualified for next month’s ATP Finals by virtue of winning the Grand Slam title and being positioned between eighth and 20th ATP Doubles Team Rankings.

Despite Wimbledon not being classified for world ranking points, Djokovic will earn his ATP Finals after winning the tournament. Kyrgios is without a singles Grand Slam crown and needed to be in the top seven players on ranking which he mathematically can’t do.

DON’T MISS:
Tennis ace aged 14 punched and kicked by dad in vicious attack as Djokovic called to help
Jack Draper to be part of Next Gen Finals trial as players to face new rules in shake-up
Andy Murray blows it as Gilles Simon rallies to end Brit’s season and keep career going

Kyrgios’ agent Stuart Duguid says his player has lost out financially by Wimbledon not being classified for world ranking points. He told the Daily Mail: “First and foremost, Novak deserves to be in Turin. But it feels arbitrary that he is the only player to benefit from his performances at Wimbledon.

“Players’ endorsement contracts are affected by their year-end ranking and whether or not they qualify for the Finals. Many, such as Nick, will be out of pocket, whereas Novak has been made whole.”