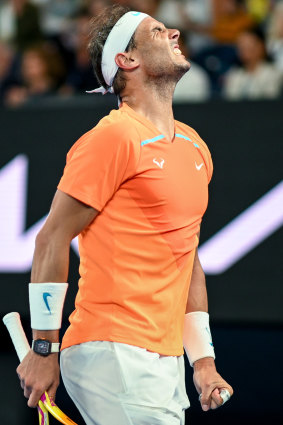 Rafael Nadal plays through the pain against Mackenzie McDonald.Credit:Eddie Jim

For many years we have wondered what the Australian Open will be like without Rafael Nadal. We are about to find out after injury ended his 2023 campaign before it ever truly got started.

Nadal’s abrupt exit from Melbourne Park, his earliest in seven years, is another blow to a tournament which has been plagued by player attrition, scorching heat and torrential rain, all in the space of a few chaotic days.

Yet, if tournament officials cursed the weather and lamented the loss of Nick Kyrgios, a player normally good for a couple of matches and a deluge of headlines, they know that Nadal, last year’s champion and a player of enduring popularity here for nearly 20 years, leaves a much larger hole.

We will never know if Nadal could have found a way through this match had his 36-year-old body held together for the duration. At the time injury struck, he was already a set and a break down against American Mackenzie McDonald, an uncelebrated player who produced some of the best tennis of his professional life before it all went wrong for Nadal.

Nadal’s only other match here was an unconvincing four-set win against Jack Draper, a Brit who could barely run out their match because of cramp. But as long as Nadal remained in the men’s draw, there was always the possibility that he would regain the kind of form that powered him through last year’s magical run.

The fateful moment came a little over an hour into the match, with McDonald serving at 4-3 in the second set. With Nadal desperate to get the set back on even terms, his scurried across court to fetch a ball hit wide to his forehand side. As he stretched low to return the shot, he pulled up sharply, his face grimacing in pain.

It was immediately apparent that something had given way in his core and, with it, his Australian Open title defence had snapped. Nadal later revealed it was a hip injury.

He knew it the moment it happened and had the diagnosis confirmed when he left the court to consult a tournament doctor. He also knew what he had to do.

He returned to court, patted a ballboy on the head and scooped up his racquet and towel to continue the match. But it was more an act of sporting grace than defiance; Nadal didn’t want to deny McDonald, a 27-year-old tennis journeyman hunting his first ATP title, his career moment.

If the biggest story of the tournament wasn’t already written in the expression on tournament director Craig Tiley’s face as Nadal emerged from the medical rooms, you could see in the gloom that descended, like a January storm cloud in Melbourne, on Nadal’s courtside entourage. His wife Maria was in tears.

Nadal said the injury meant he couldn’t hit a backhand or run for the ball. “I considered all the time stopping,” he said. “I just wanted to finish the match, that’s it.

“I didn’t want to leave the court with a retirement. Better like this at the end.”

For the next hour or so, Nadal hobbled his way through the remaining tennis until, at about 5.30pm, McDonald found himself serving for the match against the holder of 22 major singles titles, more than any other man in the history of tennis.

“I mean he is an incredible champion,” McDonald said after Nadal gave a final, rueful wave to the crowd and disappeared into the tunnel. “He’s never going to give up regardless of the situation, it was hard to close out.”

It was earlier in the match, just as Qantas flight QF144 was making its approach to Sydney, that the first mayday was issued from Melbourne Park. Only 20 minutes in, Nadal was down two breaks of serve and an already troubled tournament was fast losing altitude.

The match stats suggested that pilot error, or perhaps a hidden mechanical failure, were to blame. Nadal’s first serve was a little off and his normally metronomic forehand out of time. Uncharacteristically, most of the rally points ended with Nadal catching the net or hitting wide.

This doesn’t do justice to the quality of tennis played by McDonald, who found his service range early and showed a Nadal-like doggedness to keep the ball in play. McDonald was thrashed by Nadal when the pair met at Roland Garros but he said he fancied his chances on hardcourt – and he played like someone with a clear sense of what was needed.

Later in the match, as the impact of Nadal’s injury became clear, McDonald kept his concentration and nerves in check to do what was required to complete an unlikely progression through to the third round.

Whether Nadal returns to Melbourne for another Australian Open is by now a perennial question, but one that has become more pressing given his frustrating run of recent injuries.

Although he won the French Open, it was with the benefit of two painkilling injections before every match to numb a chronic foot problem. An abdominal injury forced him out of his Wimbledon semi-final against Kyrgios and limited his preparations for the US Open and court appearances for the rest of the year.

For all that, Nadal still arrived here as the No.1 seeded men’s player, and a sporting figure who is as much a part of our summer as the Boxing Day sales.

Whatever happens over the remaining 11 days of this tournament, it won’t quite feel the same.