Men’s second seed Casper Ruud has been knocked out of the Australian Open in a second straight boilover on centre court, following defending champion Rafael Nadal who crashed out on Wednesday and will now spend up to eight weeks on the sidelines with a hip flexor injury.

The men’s grand slam record holder received scans in Melbourne before flying out of Australia on Thursday night. “He will be resting the next days once back in Spain and will start with anti-inflammatory physiotherapy,” said a spokesperson for Nadal, winner of 22 major titles. 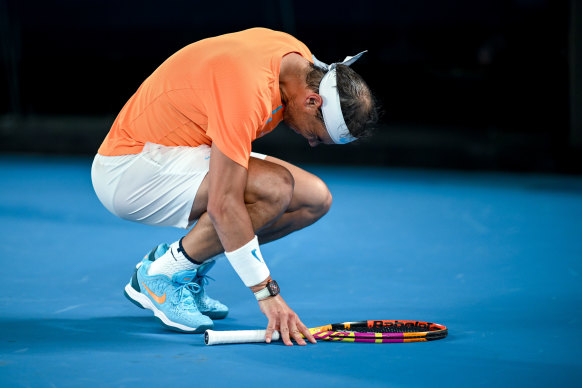 Rafael Nadal flew out of Australia after receiving scans in Melbourne which confirmed a hip flexor injury.Credit:Eddie Jim

Nadal, 36, could miss key hardcourt events in the United States in March – Indian Wells and the Miami Open – depending on the timing of his recovery. There will be intense interest in Nadal’s fitness before the Roland Garros claycourt major, a tournament he has famously won 14 times.

Nadal’s spokesperson said his MRI showed a grade-two injury of the iliopsoas [the strongest hip flexor muscle] on his left leg, for which the normal estimated recovery time is six to eight weeks.

In his absence, nine-time Australian Open champion Novak Djokovic is heavily favoured to extend his record streak at Melbourne Park. By doing so, he would match Nadal on a record 22 grand slam titles.

Djokovic’s path to victory seems a little easier after Ruud’s round-two exit on Thursday. A 24-year-old from Norway who ranks as the second-best player in the world but is not yet a household name, Ruud was vanquished 6-3, 7-5, 6-7 (4-7), 6-2 by American world No. 39 Jenson Brooksby in four high-quality sets on Rod Laver Arena. 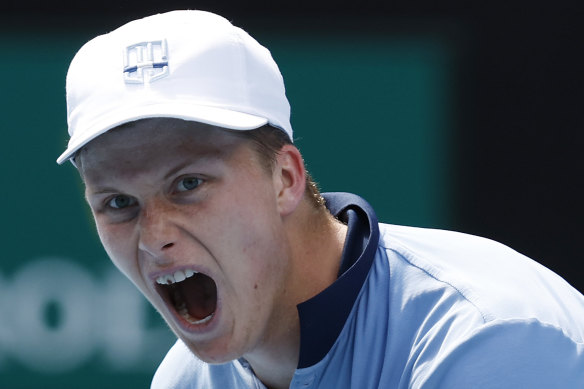 There was a moment at the end of the third set when it looked like a major comeback might be on the cards. Ruud saved three match points and went on to dominate the tie-breaker to force a fourth. Brooksby, meanwhile, appeared spent and gutted as he hunched over his racquet and stared at the ground.

But the young American, in his first appearance in Australia, regrouped quickly and played his best tennis to bring about the second upset on RLA in as many days – again at the hands of an up-and-coming Californian.

Brooksby, 22, was the superior ball striker throughout the four-hour match, winning 45 points in rallies that lasted more than nine shots, compared to Ruud’s 16. He hit 50 winners to Ruud’s 33, seven of them on the return of serve.

“He was annoying good today,” Ruud said after the match. “He makes tennis look a little different from many other players. He plays flat, he defends great from both sides. It’s a tough match-up.” 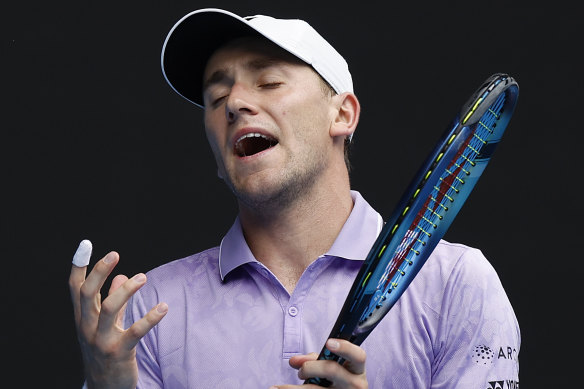 Norway is not known for its tennis, and Ruud is the first Norwegian to win an ATP tour title, reach a grand slam final or even crack the top 30. He may lack the following of a Federer, Nadal or Djokovic in Melbourne, but enjoyed the support of a vocal half-dozen supporters donning Norwegian colours and viking helmets in the stands.

Ruud called a medical timeout at the end of the second set, which he later said was due to ongoing tension from an abdominal strain he sustained in the fourth round of the 2021 Australian Open against Andrey Rublev.

Brooksby, meanwhile, is playing in Melbourne for the first time after missing the Australian Open last year when he contracted COVID-19 shortly before his planned departure. He is now part of a pack of American men going deep at this year’s tournament.

The debutant raised the familiar spectre of a less experienced player freezing up on the finish line, failing to convert three match points on serve in the third set. But Ruud also found his game when he needed it most, prevailing on the second match point after a 30-shot rally.

Brooksby let his disappointment show, and carried it into the eventual tie-breaker, which he lost 7-4.

“I was getting a little more frustrated out there that I didn’t close it out, and my mentality was changing a little bit,” he said later. “The question is how do you respond, and I just told myself to reset.”

But any doubts the young American might crumble were obliterated early in the fourth as he broke Ruud’s serve twice to race to a 3-0 lead. Unforced errors off the Brooksby racquet helped Ruud break back immediately, but it was too little too late, with Brooksby’s skilled net play earning him yet another break of serve to go up 4-1 and hold to secure a place in the third round.

There he will face another American, 25-year-old Tommy Paul, who triumphed over Spain’s Alejandro Davidovich Fokina in five sets on Thursday.