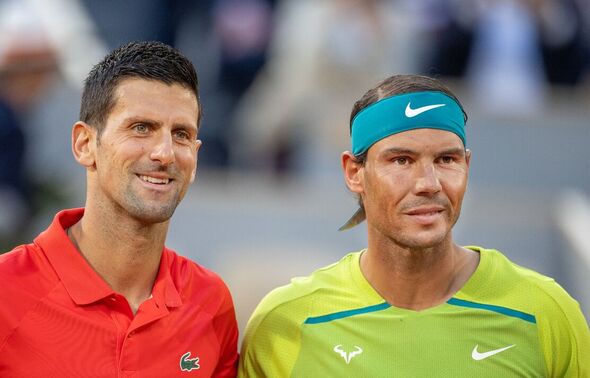 Novak Djokovic’s hopes of winning a sixth ATP Finals title in Turin this month could be handed a huge boost following an admission from Rafael Nadal. The legendary Spaniard has more Grand Slam crowns that any other player, with his Australian and French Open wins this year taking him to 22, but the end of season Finals is the one major title to have escaped him in his career.

But despite his Slam wins, Nadal has been plagued by injury this year and on Wednesday, was beaten by Tommy Paul in his first match at the Paris Masters. And after being asked who he could now practice with ahead of the ATP Finals, the 36-year-old strongly insinuated he would not be travelling to Italy.

“No, I don’t know,” he answered. “Of course, I mean, for me difficult to imagine now arriving in the World Tour Finals in shape, in enough good shape to win a tournament like this one that I didn’t win during all my tennis career.

“To play against the best players of the world since the first, since the first day, you need to be there and the rhythm, conditions, that will not happen. So the only thing I can do is try to be there earlier, have some good practice with the guys and then give my best on the court, no, and hopefully the level of tennis will be there, and the body too.”

JUST IN: Tennis star kicked out of French federation after on-court fights and umpire outbursts

Nadal went down 4-6 7-6 6-1 against the American, in his first competitive match since playing doubles in Roger Federer’s Laver Cup farewell. And he conceded he needs to be playing against the best to recapture his prolific form.

“I just think about be better, I need to improve a couple of things, and then I need to play sets against the best players, to feel myself again competitive against everyone,” he added. “That’s it. I’m gonna try to make that happen. And if not, you know what, gonna be next year, and I gonna try to have the best of seasons possible to start strong.”

And when asked outright if he’d be in Turin, Nadal was non-committal: “Yes, I hope, if nothing happens, I hope to be there,” he said. “No, I’m excited about playing, even if haven’t been the perfect couple of months for me, of course. But, yeah, nothing to lose.”

Djokovic is one of the favourites to triumph, despite being the last of the eight confirmed qualifiers. He won Wimbledon this year, but the fact there were no ranking points available – as well as missing two Slams over his refusal to be vaccinated against Covid – has affected his place in the world order.