The hyperbole bellowing from Srdjan Djokovic’s loudspeaker in recent days was no surprise to those familiar with the world No.1 tennis player’s father.

Behind Novak – the man at the centre of an unprecedented political storm in sport – are parents just as steadfast in their opinions, and even more outspoken.

“I call on all Australians and the whole world to raise their voice against terror, and the brutal human rights violations of the world’s best tennis player,” Srdjan has screamed during recent rallies in their native Belgrade.

Yet years before he was branding Australia’s Prime Minister a “dictator” and calling on the Queen to step in, Srdjan had regularly turned his ire on Djokovic’s rival, Roger Federer.

Their dispute goes back to the mid-2000s, after the protective father took exception to Federer criticising Djokovic during a 2006 Davis Cup tie for regularly calling for treatment over a sinus problem. That feud deepened when the Swiss directed a “keep quiet” comment in Srdjan’s direction at the Monte Carlo Masters in 2008.

While the players have remained relatively gracious towards one another since, Srdjan has been unable to hold his tongue, and launched his most blistering attack in an interview with Newsweek Europe. 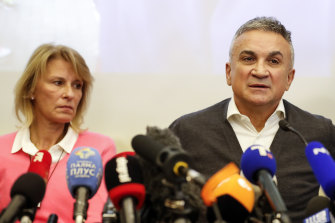 Recalling events 10 years earlier, he said: “Novak was just 19 at the time. He had a deviation of his sinuses and couldn’t breathe. And Federer tried in every possible way to disrespect him because of his breathing problem.”

Federer, he added, had “shown himself to be the best player in the world but not as a good person at that time”. His son has expressed awkwardness over the comment, but Srdjan appeared to double down on his position last year.

“About 15 years ago Federer attacked my son when he was still young, he was 18 or 19 years old,” he told Serbian television station K1. “I knew someone would be there who would be better than him. So I said that [Federer] was a great champion, the best at the time. But as much as he is a great champion, Federer is not such a good man.”

Srdjan has since demanded that Federer retires. “Go man, raise children, do something else, go ski, do something,” he said. Tennis, Srdjan added, was “not my whole life, it is just my son’s current hobby”.

In reality, however, he and his wife have been as dedicated as tennis families come in ensuring Novak’s progress in the sport since he got started in the unlikely location of a ski resort, aged just seven.

Srdjan, a former professional skier and instructor, had opened a creperie, pizza parlour and sports clothes business in the Serbian mountains when Novak was two. Mother Dijana, who has been equally critical of Australia while flanking her husband at rallies in Belgrade in recent days, was in day-to-day charge at the restaurant and would send Novak across the road to three tennis courts, where his natural talents would be discovered by renowned coach Jelena Gencic.

She told the family that they had a “golden child”, and within months Novak was travelling abroad with his father for the best training possible. By the time Djokovic was 10, the family had left the mountain resort.

The context of Novak’s childhood, growing up during the break-up of Yugoslavia, and having family roots in troubled Mitrovica, Kosovo, helps explain why his parents have never ducked controversy.

It is not only the Australian authorities and Federer who have felt the sharpness of Srdjan’s outbursts. Of Rafael Nadal, he reportedly says he “was his best friend while he was winning. When things changed, they were no longer friends … this is not a sport”.

And while they have been supported by politicians in Serbia in recent days, the family have previously endured strained relations with the authorities. Novak may have largely kept his counsel, but there have been rows with the Serbian Tennis Federation over previous demands for government support in their tennis projects.

With his against-the-odds journey to the top in mind, Novak’s mother and father have stated that the world men’s No.1 is the best in history. While such a description is doubted elsewhere, many in Serbia agree. In a Belgrade museum hangs a mosaic by artist Jovan Kentera depicting Dijana as the Virgin Mary. 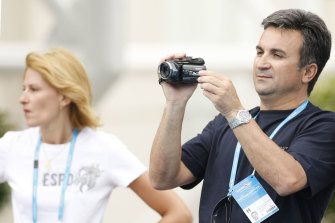 Srdjan and Dijana at the Australian Open in 2008.Credit:Vince Caligiuri

“Dijana is the mother of the new era, and one of the most important Serbians,” he said. “She has created and raised such a man, who is the pride of all of us, but also of people in the world. Dijana is a saint.”

With such praise ringing in their ears, perhaps the family can be forgiven for cranking up the rhetoric in recent days.