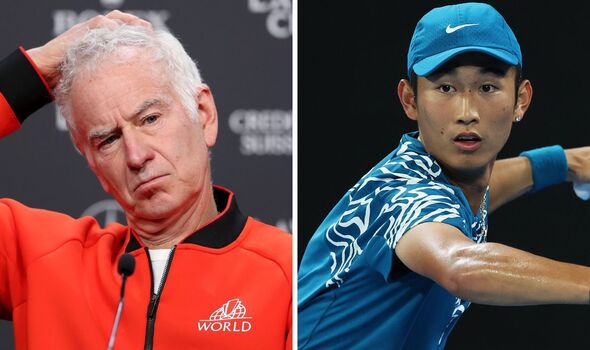 John McEnroe sparked outrage by mocking Juncheng ‘Jerry’ Shang at the Australian Open. The retired pro made a joke about the Chinese player’s name as he claimed he must be the “only Jerry in China” despite his brother Patrick McEnroe informing him that he lives in Florida.

McEnroe caused controversy when his remarks about Shang as ESPN’s Australian Open broadcast emerged on Twitter. The teenager qualified to make his Grand Slam debut in Melbourne this year and became the first Chinese man to win a main draw match, but came up against 16th seed Frances Tiafoe in the second round where he lost in straight sets.

McEnroe commented on the world No 194’s name as he attempted to joke that it must have been inspired by the cartoon Tom and Jerry – which is coincidentally Shang’s parents’ real inspiration for his English nickname. “What is this Chinese guy’s name? Jerry?” he asked during the broadcast.

“How did they come up with Jerry? Is he the only guy from China named Jerry? Did his parents watch Tom and Jerry?” While it has previously been revealed that Shang’s parents were inspired by the cartoon when coming up with his English nickname for Juncheng, fans quickly picked up on the fact that it was unlikely McEnroe knew the original story given his speculation. ESPN did not have a comment on the matter.

McEnroe’s joke fell flat with some fans who took to social media to criticise the pundit, with one tweeting: “ESPN needs a complete overhaul to their tennis coverage.” Another added: “McEnroe is probably the most annoying commentator in the game of Tennis. But this is beyond disgraceful.”

Others pointed out that commentators often struggled to pronounce the traditional names of Chinese players so were confused that McEnroe was questioning his English name. “Y’all laugh when Chinese people have English names but when they have Chinese names like Zhang Zhizhen or Zheng Qinwen you are scared to pronounce it and ask them if ‘there’s another name to address them by,’” one responded.

Another fan also pointed out that it wasn’t an isolated incident, adding: “The way they discuss the Asian players has always been so cringe and disrespectful.

“I even recall when they bring up the order of play, they refuse to say Qinwen Zheng’s name — they just kept saying “Chinese Superstar” because they didn’t want to attempt the pronunciation.”