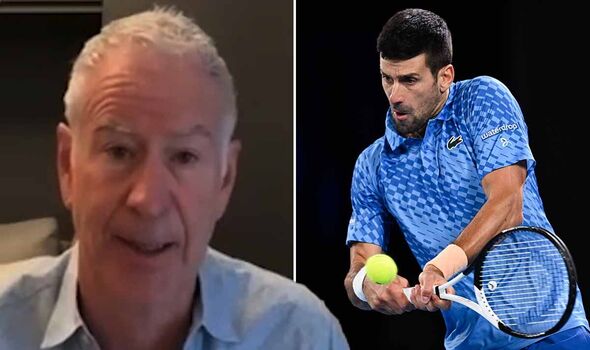 John McEnroe has tipped Andrey Rublev to lift his first grand slam title at the Australian Open – should Novak Djokovic succumb to injury troubles. Djokovic is the overwhelming favourite to claim his tenth title at Melbourne Park and is still on course to match Rafael Nadal’s record of 23 Grand Slam crowns.

But the Serbian icon raised further concerns with his left hamstring after being taken to four sets in his second round match against Frenchman Enzo Couacaud. Djokovic made it safely through, but his injury issue is proving as big a challenge to contend with as his opponents Down Under.

He was limping in between points against Couacaud and even had to take an injury time-out as he required medical attention from his physio during the second set. And prominent pundit McEnroe is realistic over Djokovic’s chances of lasting until the business end of the tournament, offering the opportunity for an unfancied star to burst through the chasing pack.

Spanish legend Nadal was ‘mentally broken’ after his shock second round exit, while box-office home favourite Nick Kyrgios dealt a huge blow to the tournament when he pulled out before his opening match.

And McEnroe has namechecked Russian Rublev, who takes on British hope Dan Evans on Saturday, as a contender for the tournament if Djokovic’s hamstring gives way.

“There’s a pretty good chance it won’t hold up,” McEnroe told Eurosport, discussing Djokovic’s injury. “But that opens the door for other players that have never won it, totally unexpected finalists perhaps, and there are others that are pushing to get to that level, maybe Rublev for example.”

World no.6 Rublev defeated Emil Ruusuvouri in four sets in his second round clash on Thursday but the fifth seed has never gone beyond the quarter-finals at a Grand Slam.

Djokovic, meanwhile, faces a tough test with Grigor Dimitrov to come in the third round on Saturday and admits he is worried about the problem that is hindering his Aussie Open bid.

“It’s not good at all, to be honest with you,” he said. “I’ll take it day by day. It was better in the last match than tonight, to be honest. That’s all I can say now.

“I just need God to help me now, and the physio and everyone. I’ll take it day by day and hopefully, I’ll be able to recover for a tough match-up in the next round.”