Although Nick Kyrgios’ relationship with Novak Djokovic is repaired, the Australian star has no regrets about an inflammatory interview in which he was heavily critical of the Serbian superstar’s character and demeanour.

The Canberran shared Rod Laver Arena with the nine-time Australian Open champion on Friday night for a sold-out practice session he said raised $250,000 for charity. 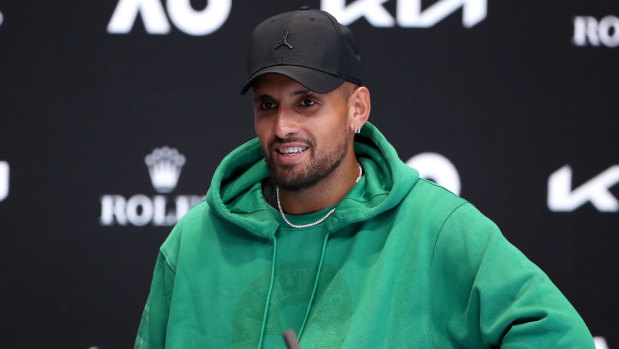 Nick Kyrgios was typically honest in his press conference on Saturday.Credit:Getty Images

The pair have been friendly since Kyrgios was among the few players to defend Djokovic after the debacle that saw the star deported on the eve of last year’s Australian Open.

The Australian sledged the now 21-time major champion in a lengthy podcast in 2019, where he also singled out Rafael Nadal and his uncle Toni Nadal for a serve.

He continued his criticism of Djokovic by branding him “boneheaded” and “a tool” for orchestrating the ill-fated Adria Tour in the infancy of the pandemic in 2020.

After an appearance at the AO Kids Day on Saturday, Kyrgios said he had learnt from the experiences of that time while revealing the status of his relationships with “the big three” of the men’s game.

“I don’t really regret anything – I think life is too short to regret,” he said. “You kind of learn from these experiences. They are all kinds of building blocks.

“At the same time, I think it’s made our relationship even more special, now it’s gone from a rough sort of place to … we’re helping each other out on the biggest stage. “To think I’m able to do that with one of the greatest of all-time is cool.

“I think my relationship with the big three is all different. I’m really close with Novak now. [I’m] quite close with Roger [Federer]. And me and Rafa – we just [nod] when we walk past each other.”

The 19th seeded Kyrgios, who plays Russian Roman Safiullin in his opening round on Tuesday, has not played an official singles match since withdrawing from a quarter-final against Taylor Fritz at the Japan Open in October.

The Wimbledon finalist injured a knee and ankle in an exhibition in the United Arab Emirates in December and subsequently withdrew from the United Cup on the eve of the tournament.

Aside from his outing against Djokovic on Friday night, he has been training at Melbourne Park this week and there have been no signs of lingering knee or ankle soreness.

“I’m just doing everything right at the moment,” he said.

“I have always been a player that doesn’t need too many matches. Obviously there are players that need a lot of matches going into a Grand Slam. But me, I just like to feel fresh.”

Where Kyrgios is scheduled to play Safiullin and, should he progress, in matches including a possible third round encounter against Danish sensation Holger Rune will be fascinating.

The 27-year-old has previously preferred playing on the slightly off-Broadway John Cain Arena during Australian Opens but said on Saturday he is happy to be on the main stage.

“I don’t necessarily mind any more. I’ve played so many matches over the last year on the biggest courts in the world,” he said.

“I think I’ve always got a little bit of a soft spot for John Cain Arena (because) I’ve had so many amazing memories on that court.

“(But) if it’s Rod Laver, I’m okay with that. I feel extremely at home on any kind of court I play on now.”

Watch the Australian Open live and free on the Nine Network – Channel 9, 9Gem, and 9NOW.