If Novak Djokovic wins his court battle on Monday, Nick Kyrgios believes he will play like a man possessed in pursuit of a record-breaking 21st grand slam crown.

Djokovic found an unlikely ally in Kyrgios on Friday, when the Australian star shared his sympathy for the world No. 1 on Twitter.

Speaking ahead of his first match of the summer at the Sydney Tennis Classic, Kyrgios provided insight to Djokovic’s mentality should he be cleared to play at Melbourne Park.

“This is just all added fuel for him. In my opinion, we all know how good of a competitor he is. You don’t become a great champion like that without being able to overcome adversity like this.

“I’m sure he’s overcome a lot more challenging times than spending a couple more extra days in a hotel room. Look, all I’m saying is, he’s going to be dangerous if he’s on court at the Australian Open.

“I don’t want to play him right now, that’s for sure. Someone else can have that task.”

Kyrgios also doubled down on the comments he made on Friday, and took aim at the way media have reported the Djokovic saga.

“I’m Nick Kyrgios, bro, I’m a tennis player. It’s not my job to comment on all of this,” he said.

“Put it this way, I think the media has done a poor, poor job. If someone has an opinion you’re either for or against it. Obviously, it’s a bit of a mess what’s going on, and I just don’t think we’ve gone about it in the right way. 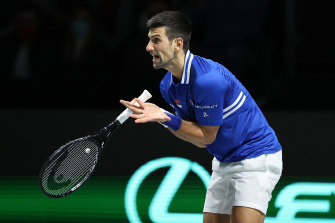 “It’s just too much at this point. I hope it all gets sorted as soon as possible.

“For the sport, we need him here. It’s that simple. He’s one of the most influential sportspeople of all time. For the sport, as I said, if he’s ready and allowed to play, in a way, I think it’s good for our sport with all this attention.”

Kyrgios forecast record television ratings should Djokovic win his legal battle on Monday, and implored Australians to recall the world No. 1 going out of his way to help raise funds for bushfire relief two years ago. 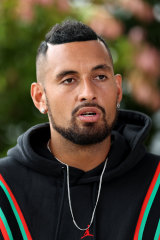 Nick Kyrgios speaks with the media at the ATP Cup on Saturday.Credit:Getty

“I just want it to end. I’m feeling for him now. It’s not really humane, is it, what’s going on?” Kyrgios said. “If this was a normal person, they wouldn’t have to deal with this media side bullshit. His life is probably hard enough as it is. I know what that’s like. I just hope it gets sorted soon.”

Pressed on whether Kyrgios would reach out to Djokovic given the pair’s recent history of verbal barbs, the Australian star conceded the pair are not yet on talking terms despite forming a friendship earlier in his career.

“I don’t know if we’re on talking terms. But that’s the funny thing about me and Novak. We actually used to be friends. We used to practice at events and again, the media has divided us as well,” he said.

“They’ve just blown some of it out of proportion, and now it’s almost made it 30 times worse. Where it was really not that bad.

“I remember Novak was one of the only actual players when I was young that came towards me and said if you ever need anything, feel free to reach out, and I’ll be open to help.

“We practiced together in Rome. I forgot my practice shoes in Rome one day and I ended up playing in Air Force Ones and I actually beat him in a set. But I feel like he’s helped us as well. During the bushfires he was supportive, he was helping us out. We’re so quick to forget.

“He didn’t have to do that. Most athletes wouldn’t do that. They’re selfish, most athletes are. I don’t forget that.