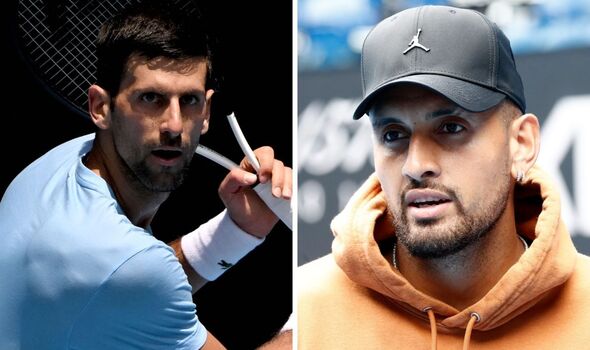 Nick Kyrgios urged Australian Open fans not to “cross the line” with Novak Djokovic after it was announced that anyone heckling the Serb would be kicked out. The world No 5 will compete at Melbourne Park for the first time since he was deported from Australia last year and the world No 21 has now sent a message to anyone planning to taunt Djokovic on his return to the tournament.

Djokovic is back in Australia 12 months after having his visa cancelled and being deported on the eve of the Aussie Open. The 35-year-old has already been in Melbourne all week preparing for the first Major of the year, where tournament organisers sent a strong warning that they would throw out anyone planning to disrupt Djokovic’s matches by heckling him.

Kyrgios has now weighed in and sent his own message to any fans planning to jeer and boo the nine-time Australian Open champion as he claimed it would be “clown” behaviour. “He’s abided by the last two years of whatever has been dealt his way and he’s here and all he wants to do is put on a show,” the 27-year-old said.

“He’s chasing things that athletes rarely are able to chase. He’s one of the greatest athletes of all time, not just in the tennis court.” The seven-time title winner thought it was inevitable that some spectators would be hoping to see him lose but explained that they couldn’t take it too far in the stands.

He continued: “I know that there’s going to be fans that are not going to want him to win but I think they can’t cross that line as fans. You guys have paid money to watch a guy play. It’s a bit contradictory if you’re gonna go there and be a clown about it.”

But Kyrgios wasn’t confident that everyone would stay in check, as he admitted he thought that some would take it too far to make their feelings known. “You’ve got to respect him a little bit at the end of the day, because he’s one of the best to ever do it. But look, I know there’s going to be fans that are gonna cross the line anyway,” he added.

Kyrgios was one of the few players to publicly support Djokovic during his ordeal in Australia last year, which saw him have his visa cancelled twice and spend time in a government detention hotel before he was eventually kicked out of the country. The pair have since struck up an unlikely friendship and will be facing off in a charity match at the Australian Open on Friday.

The exhibition practice match on Rod Laver Arena will be their first meeting on a tennis court since last year’s Wimbledon final, and will also give Djokovic a good indication of the crowd reception he will receive during the fortnight of the tournament. “I really hope that the crowd will be receiving me well I guess,” the 21-time Grand Slam champion told 9 News ahead of his first match in Melbourne.