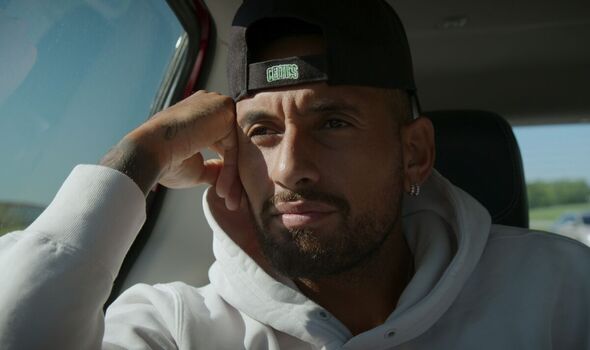 Nick Kyrgios opened up on a “chaotic” period of his career that saw him turn to alcohol every night in Netflix’s new tennis documentary series as he explained that his difficult past had forced him to re-evaluate his schedule. The Aussie is one of several players being followed in Break Point, and admitted to “spiralling out of control” in a candid chat with his girlfriend and manager.

Kyrgios has given an unfiltered look into his life and career in Netflix’s new tennis documentary created by the producers of Drive to Survive. The often-controversial Australian is one of the biggest characters in the sport and earned himself a whole episode in the new series, in which he shares an emotional insight into the darker days of his time on the tour.

The world No 22’s girlfriend Costeen Hatzi and manager Daniel ‘Horse’ Horsfall feature heavily alongside Kyrgios in the first episode titled ‘The Maverick’, and the trio sit together for a sincere conversation about the Australian’s first few years on the tour following his breakout performance against Rafael Nadal at Wimbledon in 2014, when Kyrgios beat the then-world No 1 as a 19-year-old wildcard.

“The first four, five years of my career, it was just so chaotic,” the seven-time title winner tells his girlfriend and the cameras. “When Horse was on tour with me, it was just like basically him looking after me.”

JUST IN: Djokovic apologises to team for kicking them out of Adelaide final

Kyrgios – who managed to reach the Wimbledon final last year – admitted that he had been struggling with his mental health and developed something of a drinking problem as he would go out “every night” and need to be brought home by his manager, sometimes hours before a tennis match. The Aussie continued: “He would just see my mental wellbeing just declining every week. My life was kind of spiralling out of control, drinking every single night.”

Horse himself then shared his own version of events, adding: “I used to have your location on my phone and some mornings I would have to go and physically find where you were. What hotel you were at, whose house you were staying at. Before tournaments, before a match. So it was tough.”

The Australian Open men’s doubles champion plays a very light schedule compared to the rest of his rivals, competing in 13 tournaments last year while the current ATP top 10 played between 14 and 26 each in 2022, with Novak Djokovic only playing as little as 14 because of his vaccine bans from several events. And Kyrgios explained the reasoning behind his scheduling decisions, as he said he couldn’t stay on the tour for prolonged periods of time without feeling his mental health slipping again.

“I was like okay, I can’t keep doing this. I decided to start being kinder to myself,” the 27-year-old admitted. “For my mental health, I could never be one of those players who plays all year around. I couldn’t do that.

“I value my family, my close friends and Cozzie too much to put tennis in front of that anymore. I don’t think that’s healthy. I don’t really have any expectations now in my matches. I just want to go out there, have fun and take the pressure off. And then we can kind of live more of a normal life. It’s much better like this, that’s for sure.”

Part one of Break Point will be released on Netflix on Friday January 13.