En route to the Paris Masters Jack Draper took the tube up from his Surrey home to London St. Pancras for the Eurostar, lugging his racket and kit bags.

‘Nobody recognised me so it’s quite good that no-one knows who I am for now – maybe they will when I do something bigger,’ he reflected, standing in the bowels of the Bercy stadium.

The idea that his close contemporary and friend Emma Raducanu could travel incognito on the underground is unthinkable. 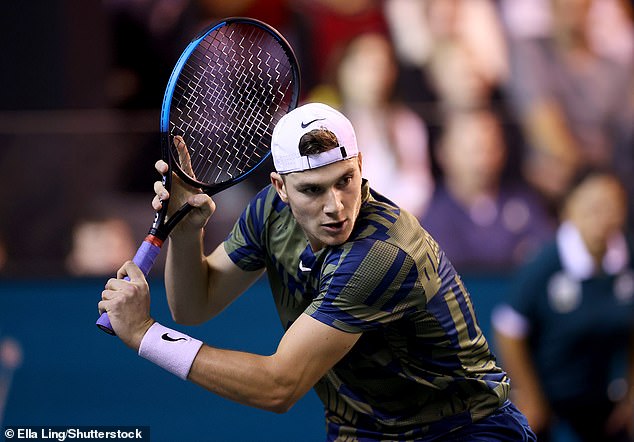 That may soon be the case for 20 year-old Draper, too, if Andy Murray’s recent assessment proves correct that he will be ‘right up at the top of the game in the next 18 months’.

Of course he is yet to do anything as seismic as win the US Open, but he does break some new ground this week by becoming Britain’s first representative at the NextGen Finals in Milan. This is the ATP event for the world’s top eight under 21 players of the season.

Draper qualifies by virtue of his steepling rise in 2022 from a starting point of 265 to 41, with some eye-catching performances in recent months.

His is by far the biggest leap of anyone getting into the top 50 this year (Murray is actually fourth on the list at +86).

At the US Open Draper defeated Felix Auger-Aliassime in straight sets, and a fortnight ago lost 7-5 in deciding set to New York champion Carlos Alcaraz. Both of them have qualified for the main eight-man ATP Finals in Turin this month. 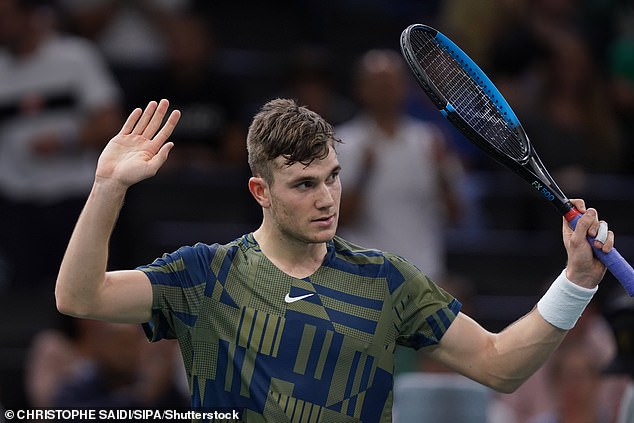 ‘A year ago I was at a club in Germany playing a Challenger level event, trying to grind my way up and I’ve now been able to play on big stages. There would definitely have been an element of surprise back then if you had told me that I would be top 50 in the world,’ said Draper, who had just come off court after closing out Frenchman Arthur Rinderknech before a partisan crowd on the huge main arena.

‘This is exactly what I wanted since I was younger, to come out and play these types of players at this level and have crowds like this, so you know you’re able to deal with that stuff.

‘I remember playing Gael Monfils in Montreal (this summer) and it was similar because they get behind French players there. I played Alcaraz in front of 10,000 people in Basel last week, and it was a great experience.

‘You can build these guys up in your mind to be incredible players and, don’t get me wrong, Alcaraz is an amazing player, he’s world No 1 for a reason. 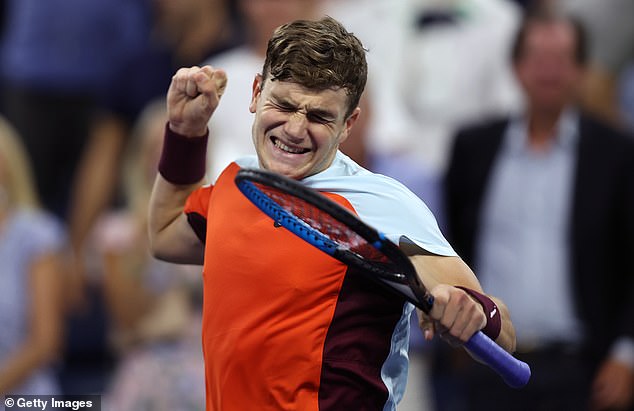 ‘But the experience of playing these guys has shown me I’m not that far off. That’s the biggest lesson of this year, plus the things I need to get right, maybe start being more aggressive and physically getting stronger.’

The irony will not be lost that Draper is the son of Roger, the former Chief Executive of the Lawn Tennis Association.

He spent seven years up until 2013 struggling to get some sort of production line of British talent going, although he could point to the gradual upturn seen since as evidence that it was not all in vain.

Mother Nicky is a coach and former top British junior, and was instrumental in developing her offspring’s young talent. That journey through the juniors is evident in the way his game is still evolving.

As a relatively diminutive teenager Draper developed as someone who needed to rally and scuffle around the back of the court. 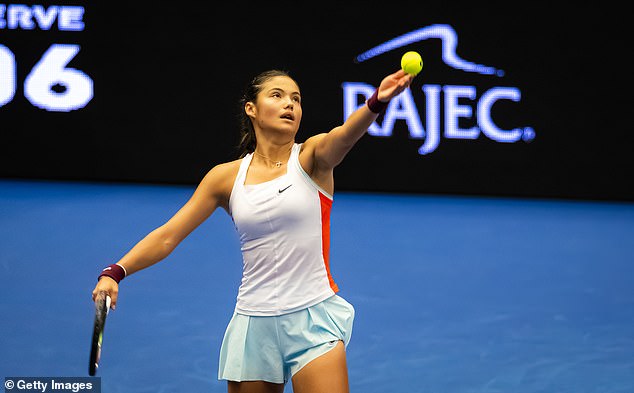 Along with Emma Raducanu, the former US Open champion, Draper will fly the flag for Britain

At 17 a huge growth spurt propelled him towards 6′ 4′ in height, which has supplied him with weapons that include a fearsome left-handed serve that has been recorded at 138mph.

‘It’s exciting for me that when they think of tall players they think of big serve and forehand but they don’t move that well,’ says Draper. ‘But one weapon I have is that I can see the game well and I feel like I can move well, and that surprises people.

‘ I can scrap around the court a bit like when I was younger. Definitely as I get stronger my serve is going to improve, my average speeds are quicker this year, maybe I was 120 (mph) at Wimbledon, it’s now more like 125, but with my serve it’s the accuracy and percentage. I want to hit my spots better and get my average higher.’

Draper’s progress might have been further accelerated, had he not suffered a variety of injuries, the most recent of which stopped him in the third round of the US Open.

To try and avoid any more of those he is planning a ‘monster’ training block in Florida starting later this month.

‘That’s very important, because there’s a limit to what you can do when you are playing matches. I struggled a bit over five sets at Wimbledon, but already in New York that felt easier.’

After Milan – where the favourite will be Danish teenager Holger Rune, now in the top 20 and Paris Masters finalist – he first plans to take a couple of weeks off at home: ‘You are away so much. I need just to hang out with friends and be an normal 20 year-old for a bit.’