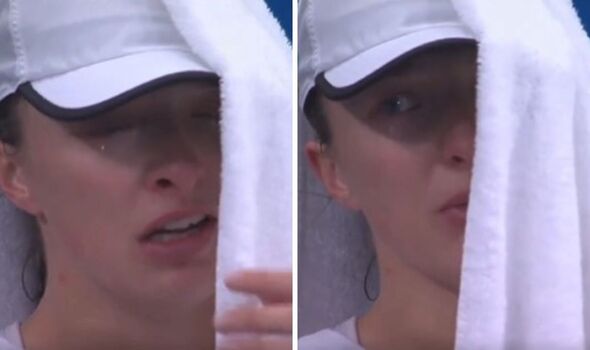 Iga Swiatek was left in floods of tears on Friday as she suffered a shock upset loss to Jessica Pegula in Poland’s United Cup semi-final tie against the USA. The usually-unstoppable world No 1 could barely get a look in as the world No 3 rolled through to clinch a 6-2 6-2 victory in just an hour and 11 minutes, and the 21-year-old could be seen crying at her team bench following the one-sided defeat.

Swiatek suffered her first loss to Pegula since 2019 as the Pole struggled to get a strong-hold on the match, winning just 38 per cent of the points on her first serve and 33 per cent on her second. The three-time Grand Slam champion earned herself a reputation of being almost unbeatable during her remarkable 2022 season but was dominated in the United Cup rubber, winning the least number of games in a single match since March 2021.

While the 28-year-old earned her first career victory over a world No 1 to get the first point on the board for America in the semi-final tie, Swiatek could be seen sobbing underneath a towel on Poland’s team bench as she spoke with team captain and retired pro Agnieszka Radwanska. The 21-year-old had defeated the world No 3 in all four of their meetings last year, and later admitted she had been shocked by her inability to rise to the challenge this time around.

“She’s one of the best players in the world so you have to be really on top of your game to win against Jessie,” the 11-time title winner said after the match. “It was always like that, even last season.

JUST IN: Tennis fans respond to government as Wimbledon told not to reverse ban

“So I’m not surprised, because I know what she can do. I’m more surprised I just wasn’t able to step up to her game today.” Swiatek suffered a slow start in the match, getting broken immediately and going 0-40 down on the Pegula serve before she was able to break back.

But from then on, momentum was well and truly with the American as she broke the world No 1’s serve four more times to close out a 6-2 6-2 victory, winning almost double the number of points as Swiatek in the match with 61 to 33. And things got worse for Team Poland, as Frances Tiafoe then defeated Kacper Zuk 6-3 6-3 to give the USA a 2-0 lead.

After his match, the ATP No 19 admitted he had been inspired by Pegula’s heroics against Swiatek. “When I saw her play today I was like, I can’t come out here bulls***ing so yeah,” he told the crowd in Sydney. “That was unbelievable, to beat Iga, who is obviously the best player in the world, that heavily. I think Jess is an unbelievable player, unbelievable person.”

The semi-final tie will continue on Saturday with three more matches as Poland’s Hubert Hurkacz takes on fellow top ten player Taylor Fritz before Magda Linette and Madison Keys do battle. Swiatek and Pegula are currently set to face again in the mixed doubles, with the world No 1 listed to partner up with Hubert Hurkacz while the 26-year-old will join forces with Taylor Fritz.

And the Pole was still hopeful that her compatriots could pull off a comeback following her heartbreaking defeat to the world No 3 as she said: “I have a belief that we can do a lot.

“Magda played really solid match two days ago, so I hope she’s going to be confident. I would say they are both 50/50, but it depends. I will do my best on the bench. I wasn’t able to do that on court today, but I will do my best to cheer and help them.”