First published in The Age on September 9, 1997 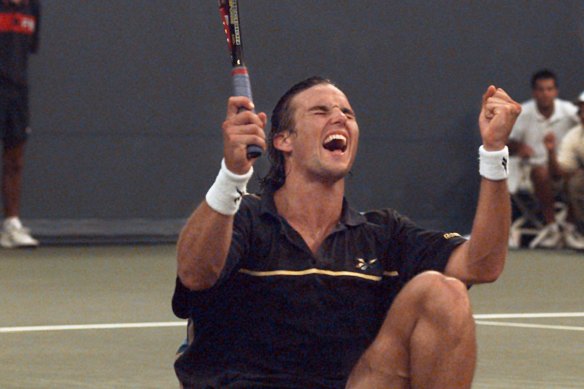 It was 2.30 on the last afternoon of the US Open. Martina Hingis and Venus Williams were into the second set of the women’s final. Outside, the long line of practice courts were empty except for three men. Patrick Rafter, John Newcombe and Tony Roche were fine-tuning Rafter’s assault on the championship.

The key was simple, Roche said later: “Keep knocking the returns back.” Easier said than done, as Greg Rusedski officially has the biggest serve in the world. But Rafter wanted him to know that even some of his biggest bombs were going to come back. 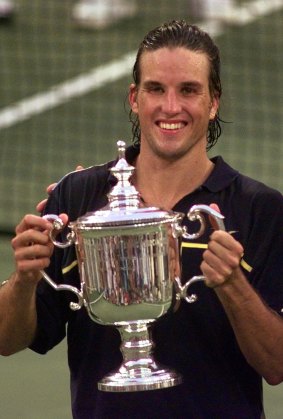 Patrick Rafter holds up his trophy after winning the men’s singles finals match at the U.S. Open.Credit:AP

As it happened, the game in which Rusedski sent down the fastest serve ever recorded, 143 mph, also showed his vulnerability. He held that service game, which wasn’t surprising, but Rafter made him work for it.

Rusedski “had fire in his eyes”, said Newcombe, and his racquet was practically smoking. But he was also fatigued; starting to breathe heavily. It was as if he had launched one last, desperate effort. The match was two and a quarter hours old, he trailed Rafter by two sets to one, and once Rafter held his own serve to love it was 5-5 in the fourth.

In the 11th game there were no more world records for Rusedski, who like Rafter, had gone from being a first-round US Open loser to finalist in one year. He lost a volleying exchange to fall behind 0-15. A volleying error took him to 0-30. When Rafter, gasping with effort, reached a dropshot and put away a smash, Rusedski trailed 0-40 and faced three break points.

Rafter needed just one. Rusedski saw a serve returned at his feet, as had happened so often during the match, and dumped a half-volley into the net. Rafter raised his fist to his support group. They would change ends, he would fiddle with the strings of his racquet, then serve for the match.

It was 6.36pm. There was still blue sky above, but the court was floodlit. The American crowd that had found much to absorb them in a final between a Brit and an Australian (the first at the US Open since 1933) cheered both players, the most unexpected pair of championship contenders since Newcombe and Fred Stolle, both unseeded, played in 1966.

Final game. Rafter won the first point. One down; three to go. “To win the first point is a very big thing to do, especially when you’re serving for the match,” he said afterwards. “If you go down 0-15, you become pretty nervous. As soon as I won that first point, I felt pretty great. I probably shouldn’t have been celebrating that hard too early, but I just couldn’t control it.”

Rafter conceded the next point when he pushed a back-hand wide, but it was the last point he would lose in the tournament, which he began as the No 13 seed and ended as the champion: the only unbeaten player of the 128 in the main draw.

And he ended it as he began: playing old-style serve-volley tennis, at times flourishing his racquet like a wand and conjuring almost miraculous winners.

In a year in which he had been runner-up in five tournaments, Rafter won a US Open title in his first Grand Slam final — the first Australian to win the US championship since Newcombe in 1973.

Rusedski, who proved himself a worthy finalist when he turned what seemed likely to be a thrashing into a four-set fight, said of Rafter: “He’s probably got the best volleys on tour because of his movement. I think he’s got a bright future and Australia should be proud of him.”

So it should. And Rafter is rightfully proud of himself for the way he seldom cracked whenever he was put under pressure in the last week of the tournament. Agassi staged a comeback and got a raucous late-night crowd behind him but couldn’t roll over him. Chang couldn’t break him. Rusedski couldn’t bludgeon him with his serves.

But Rusedski did make him struggle. After seeming exasperated late in the second set, which he had lost before the match was one hour old, he broke Rafter’s serve for the first time early in the third set then shot to a 3-0 lead. Rafter recovered to draw level, but Rusedski hit a running forehand winner to break Rafter again in the 10th game and win the third set.

After 102 minutes, the crowd — and Rafter — had a match on their hands. Rafter was worried. He could feel the momentum moving to Rusedski. “You get into that situation in a Grand Slam final, all you want to do is get the thing over and done with as quick as you can. The last thing you want to do is lose from two sets to love up.”

Rafter wouldn’t lose, but he had trouble putting Rusedski away. He celebrated with a leap on court when he broke serve in the third game. Two games later he had four opportunities to go to a 4-1 lead. But Rusedski served his way out of trouble, and within minutes the set was all square at 3-all.

In the end, everything Rafter has gone through this year, including losing a semi-final at the French Open and being runner-up so often elsewhere, gave him the maturity that made the difference.

At crunch-time, with a US Open title on the line, Rafter was superb. He lost one point in his last three service games.

Rafter, who prefers to travel the circuit without a full-time coach, acknowledged the help of Newcombe and Roche and also “Fitzy” — another Davis Cup hero, John Fitzgerald. It seems this US Open triumph was an all-Australian affair.

Four hours after Rafter’s victory, the board outside the main entrance to Flushing Meadows was still showing the score in the men’s final. Inside the old main stadium, lights were being turned off in the corridors where pictures hang of former champions: Rosewall; Graf; Navratilova; Becker; Sampras.

They should make room for another. Patrick Rafter has arrived.