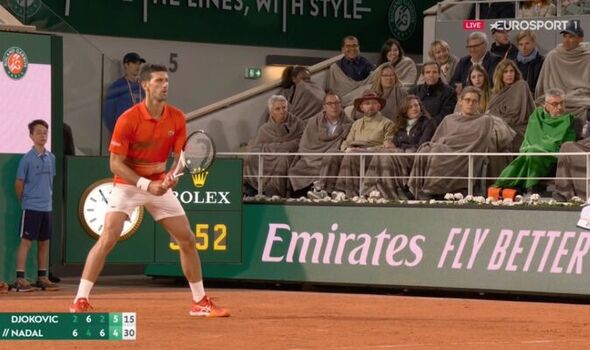 Fans who attended Novak Djokovic’s drawn-out battle against Rafael Nadal at the French Open on Tuesday evening were forced to use blankets to keep warm during the duel. The tie spilled well into the early hours of Wednesday before Nadal won.

Nadal led two sets to one in the quarter-final, although he looked set to lose the fourth set to the Serbian to set up a tense decider. Djokovic was 5-2 up in the fourth and had the advantage to take the game to a fifth set, yet the Spaniard had other ideas.

He launched an incredible comeback that saw him win the final set 7-6 (7-4) to record one of the most impressive wins of his career. And Eurosport’s camera during the match caught fans using blankets at just before 1am at Roland Garros in a bid to keep a bid to keep warm whilst watching the match in the late hours in Paris.

Despite the fact it will have been difficult to get home for some, most stayed to watch the entire match, which was a thriller. It finally finished at around 1.15am local time, with the popular Nadal triumphant.

But he acknowledged the tournament was nowhere near won just yet, despite a number of fans and pundits now thinking it will be a formality after he dumped out the world No 1. “I don’t know what can happen. I think I’m gonna be playing this tournament because we are doing the things to be ready to play this tournament, but I don’t know what’s gonna happen after here,” Nadal said.

“In the end it has been a very emotional night for me. I am still playing for nights like today. But it is just a quarter-finals match. So I just gave myself a chance to be back on court in two days, play another semi-final here at Roland Garros means a lot to me.

Nadal faces Alexander Zverev on Friday afternoon, with the German progressing past Spanish sensation Carlos Alcaraz on Tuesday. A triumph in the tournament would mark an incredible 14th French Open win for Nadal.