Roger Federer supposedly held his bad knee for five minutes during a recent interview as he gears up to bid farewell to tennis at the Laver Cup this weekend. Attention is slowly turning towards what the Swiss icon will do after retirement and he pledged to fans that he won’t ‘become a ghost’ and still wants to be involved in the game, with a potential Wimbledon role in the pipeline.

Federer released an emotional statement on social media last week detailing his plans to retire after a long battle to try and recover from a knee injury. He confirmed that the Laver Cup will be his last competitive tournament with fans subsequently clamouring to seal their seats at the O2 in London to witness his farewell.

There had been questions over whether the 41-year-old would be fit enough to play at all. On Tuesday, Federer all but confirmed that he will play a doubles match at the tournament but claims of holding his ‘bad knee’ during a recent interview suggest that he may find the going tough.

“I feel good,” he told BBC Breakfast. “It’s been an emotional few weeks. I tried to get the words right, make sure they reflect what I’m feeling and thanking people along the way. It’s been a very long journey. A good one. I wish it would go on forever. 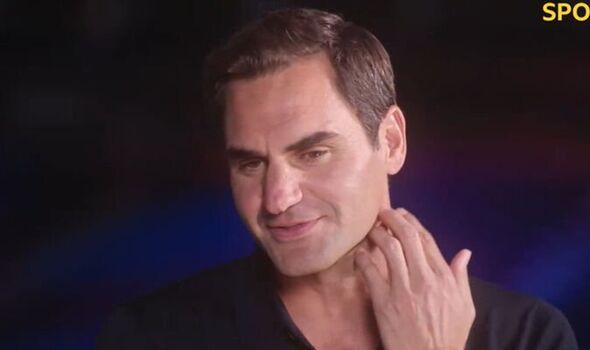 “Now it’s going to change and go on in a different manner but I just wanted to let the fans and people know that I will still be seen. I love this game and I want to stay involved in some shape or form. I’m not just going to become a ghost or a stranger and not be around anymore. The last year has been tough to say the least. I knew I was on very thin ice ever since I played Wimbledon. There was a limit to what I could do.”

The BBC presenter then revealed that Federer was ‘holding his bad knee for about five minutes’ while talking about retirement, despite promising signs that he will be fit to turn out at the Laver Cup.

Federer teased his future role in tennis earlier this week, telling Swiss media: “I never thought I would say this. But six months ago I suddenly thought: commentating on tennis someday, who knows? Although I always said I would never do that. But to commentate on some matches at Wimbledon…”