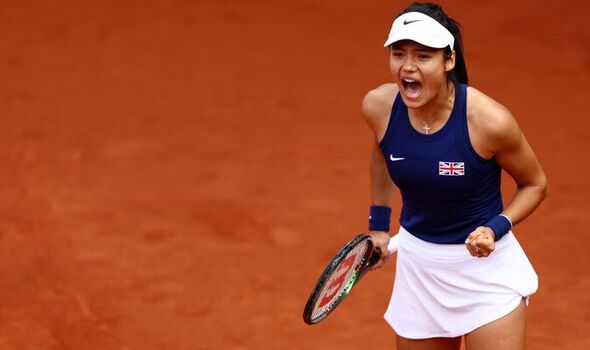 Emma Raducanu won the first clay court match of her career to give the British Billie Jean King Cup squad a crucial point in their qualifier tie against the Czech Republic. The world No 12 came through a tight match against Tereza Martincova 7-5 7-5 in an two hours and four minutes to get her team level at 1-1 in the tie following compatriot Harriet Dart’s 6-1 6-0 loss to Marketa Vondrousova earlier in the day. It was both the 19-year-old’s Billie Jean King Cup debut and her first-ever professional match on a clay court.

Raducanu opened her first-ever professional set of tennis on a clay court with a break, taking a 2-0 lead over her Czech opponent before she was broken straight back. It was a neck-and-neck opener between the world Nos 12 and 50 before Martincova managed to pounce and break to lead 5-4, giving herself the chance to serve for the first set with the Czech Republic already leading by one point in the qualifier tie.

But the 19-year-old didn’t back down in the face of adversity in her clay debut, saving a set point at 30-40 to reel off three straight points and break back for 5-5. It was the first in a run of three consecutive games for Raducanu, who managed to win her first set of tennis on the surface 7-5 in 58 minutes, putting herself within one set of a crucial point for the British squad.

It was Martincova who started the second set on a run of form as the wind started to pick up slightly, quickly going up a double break at 3-0. It was the first in a string of four consecutive breaks, as a double fault from the world No 50 gifted one break back to Raducanu before she regained her double-break lead until the US Open champion broke once more for 2-4.

JUST IN: Djokovic questioned over ‘curious’ decision as he may repeat mistake

It ended up being four straight games for the clay-court debutante, who ended the slew of breaks by holding at 3-4 and managed to break to love before she was forced to fend off four break points in a monumental nine-deuce game, putting her one away from a crucial point at 7-5 5-4. She found herself within a game of the match once more at 6-5 and this time managed to set up a crucial break point, giving herself match point and converting to close out a 7-5 7-5 win in two hours and four minutes.

The victory marks Raducanu’s first-ever tour-level win on a clay court and her first win over a top 50 opponent since her US Open semi-final against 17th seed Maria Sakkari. It also means Great Britain and the Czech Republic now each hold one point at the end of the first day of their qualifier tie. It will be a reversal of opponents on day two as Raducanu will face world No 32 and fomer French Open finalist Vondrousova on Saturday. The 19-year-old beat the Czech at Wimbledon last year in what was her Grand Slam debut as the 338th-ranked wildcard.

Dart will face Martincova in the second match while Sonay Karthal and Katie Swan have been prematurely selected for a potential fifth rubber in the doubles against Marie Bouzkova and Linda Fruhvirtova if needed.

Britain’s BJK Cup captain Anne Keothavong had praised her new team member ahead of the weekend tie, admitting that she thought Raducanu would be able to grow into the role of the team leader after her debut in the squad. “It feels like a new era,” she told BBC Sport.

“I’m excited about the team. I guess a lot has happened over the past year and obviously Emma’s success has been highlighted and we’ve seen what she’s been able to achieve in such a short space of time. So we’re kind of getting into the unknown a little bit, and there has been a bit of a changing of the guard. I’m sure Emma will embrace her position, lead the team by example and really grow in that role in the years to come.”