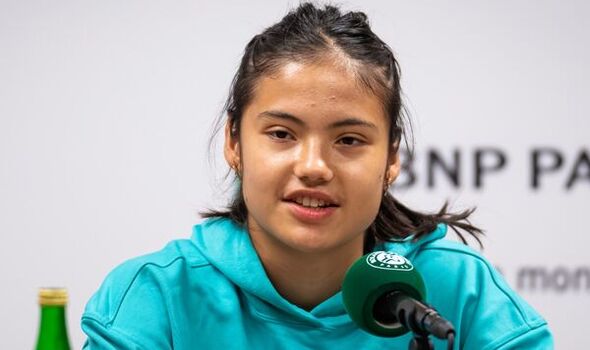 Emma Raducanu wants to add French to her list of languages as she faces a test of her claycourt learning at Roland Garros. The US Open champion already speaks Mandarin and Romanian – the native tongues of her parents.

And before her Paris match on Sunday against Czech qualifier Linda Noskova, the British No.1 revealed she adores the Gallic language and is looking to add more happy memories on her French Open debut.

“I definitely want to learn French because out of all the languages I think it’s probably the one that I’ve got the best chance at picking up relatively quicker than the others,” she said. “I love the language. It sounds so nice. So hopefully in the future.

“I did GCSE French and I got a nine. But you know that’s GCSE French. I really do enjoy languages. And I always said that after my exams I wanted to learn languages, but I haven’t just had the moment to do that. I came to Paris with my parents when I was younger and went up the Eiffel Tour. And before juniors, I played a Tennis Europe event here.

“Some of my fondest memories are coming to Paris on the Eurostar. Like the LTA trips when we were 10 years old. Just having ham and cheese baguettes and hot chocolates. I have got a very great amount of memories here.”

Raducanu played the junior French Open in 2018 and reached the second round. “It sounds like a really long time – it has gone by really, really fast,” she smiled. “I remember 2018 was actually a really good year for me in the juniors. I’ve definitely been through a lot more experiences on the court and also off the court. But as a person, I am like the same. Genuinely. Nothing has changed. Like I’m still that kid.”

Her young opponent tomorrow also shines in the City of Light as Noskova won the junior title here last year. Since then, the 17-year-old has risen from No.659 to No.185 in the world rankings and is the youngest woman to qualify here since 2009.

Before her first ever Tour-level match, Noskova said: “I have great memories from the juniors, the whole occasion, moments with the crowd, I just love the vibes here.”

Raducanu, who has declared herself fit after pulling out of the Rome Masters with a lower back injury, will be play only her 10th professional match on clay and admits she is still learning tactics like the dropshot. “I am just having fun with it, and I love how the crowd gets so involved here,” she said. “It definitely brings a lot of atmosphere. I think that I have definitely come a long way and probably progressed faster than expected of myself in the last few weeks and I really am enjoying the clay.”

Last year’s champion Ash Barty has retired so world No.1 Iga Swiatek is the hot favourite to extend her 28-match winning streak which has seen her win her last five tournaments.
But the Australian Open semi-finalist said: “I haven’t played a Grand Slam since the streak started.”