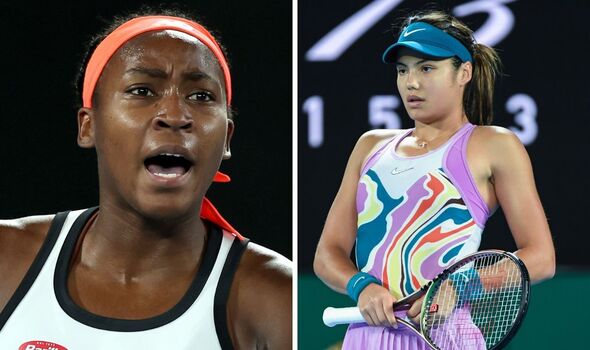 Emma Raducanu batted away a reporter’s question regarding the apparent stomach issue she was dealing with against Coco Gauff in her post-match press conference. The 2021 US Open champion was handed a difficult draw at the Australian Open while doubts were still raised about her fitness levels coming into the tournament.

It was just a few weeks ago in Auckland where Raducanu left the court in tears after rolling her ankle. But the 20-year-old was able to put herself in a position to enter the main draw for the Australian Open and got off to a strong start with a convincing win in the first round.

It set up a hotly-anticipated match against American superstar Gauff in the second round. The No 7 seed is being tipped to win her first major this year having established herself as a constant threat at majors in recent years.

Despite being just 18 years of age, Gauff was looking to pick up her 100th WTA Tour victory against Raducanu. Neither of them got off to a fast start with numerous unforced errors from both players resulting in three consecutive breaks of serve.

JUST IN: Aus Open star tells crowd ‘shut up’ in claim fan had ‘too much’ beer

Gauff eventually came out on top to take the opening set and Raducanu then appeared to pick up a problem with her abdomen as she could be seen wincing and stretching out her stomach in between points. Despite the clear issue, Raducanu continued battling through and looked at one stage to be forcing a deciding set.

But Gauff held on in the tiebreak to win in straight sets with Raducanu failing to get past the second round of the Australian Open once again. Raducanu was asked to clarify her apparent stomach issue after the match, but she avoided giving a straight answer.

“As I said, I think that the limited practice time is difficult to play matches and be in that sort of condition,” she said. “But, yeah, I think we did a great job to get onto the court this week.

“Obviously I’ve just got a lot of work to do from here and just looking forward.” Raducanu added that she’s “not sure” when she’ll return to the court as the Brit wants to focus on returning to full fitness first.

“I just have to review the body right now. I’ve had some niggles in the past few months, and I just need to get that sorted, train, and then we’ll see after that,” she added. “But I’m actually just looking forward to putting in the work, and I feel, as I said before, I’m putting in a good system in place, and I’m really buying into and trusting the work that I’m doing with Sebastian [Sachs] and the rest of the team.

“So, yeah, I’m feeling good and confident that in six months’ time I know it’s not going to be, like, the finished product, but hopefully I would have made strides.”