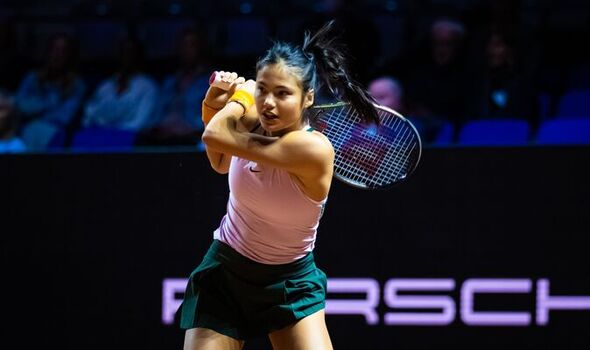 Emma Raducanu has admitted she is “looking forward” to facing a world No 1 for the first time when she takes on Iga Swiatek in Stuttgart tomorrow. The world No 12 reached her first quarter-final of the season with a 6-0 2-6 6-1 win over lucky loser Tamara Korpatsch and said she had “no expectations” going into her clash with the in-form Pole.

Raducanu won back-to-back matches for the first time this season with her victory over Korpatsch, in what is her debut WTA tournament on clay. Her reward is a first meeting with world No 1 Iga Swiatek in Friday’s quarter-final, something the teenager is looking forward to experiencing for the first time.

The Pole is on a 20 match-winning streak which spans three back-to-back WTA 1000 titles, a feat not achieved since Serena Williams did it in 2013, having won Doha, Indian Wells and Miami, as well as her Billie Jean King Cup tie for Poland and her opening match in Stuttgart. With the top seed on such a hot run of form, Raducanu has confessed she feels zero pressure going into their highly-anticipated first meeting.

“Of course she’s in great form and it’ll be an interesting match but she’s No 1 in the world so I feel like I’ve got no pressure going out there, playing on clay against her,” the eighth seed said after her third-round win. “So yeah I’m looking forward to the match.”

After her opening match against Storm Sanders, the US Open champion admitted she was enjoying her tennis again after rediscovering the free-swinging mindset that helped her win the title in Flushing Meadows last year, and now said it “could be” a good chance to relieve more pressure when she takes on the world No 1. Speaking in her on-court interview, the 19-year-old added: “Again I feel like there are no expectations of me in the matchup tomorrow but I’m looking forward to seeing what happens.”

It was an up-and-down match for Raducanu, who is playing her maiden WTA Tour match on the clay this week after making her debut on the surface at Billie Jean King Cup last Friday. Speaking about her slight lapse in the third-round clash which saw her drop the second set 6-2, the world No 12 was full of praise for her opponent.

“I mean overall I feel like Tamara, she came out in the second set and played some unbelievable tennis,” Raducanu said of the lucky loser. “You know, I didn’t even think I was making too many mistakes but I dropped the ball slightly short and she was all over it so big props to her because that second set I felt like I wasn’t even doing much wrong and for me it was just about regrouping for the third set and trying to stay aggressive.”

The world No 296 took a toilet break after she failed to win a game in the opening set against Raducanu, something the Bromley teenager was asked about in her on-court interview. “I mean I was feeding myself some forehands if that helped but it clearly didn’t,” she laughed.

“I feel like toilet breaks we’ve experienced them enough in tennis but I feel to be honest I came out and won that first game but then after that first game in the second set she came out swinging and sometimes you’ve just gotta ride the storm and just try keep doing what you’re doing and just hope in the long game that things will prevail.”