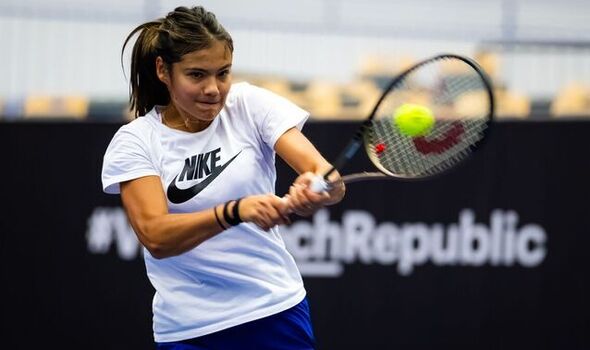 Anne Keothavong has shared an update on Emma Raducanu’s progress after the 19-year-old was forced to withdraw from this month’s Billie Jean King Cup Finals with a wrist injury. Britain’s captain revealed that the world No 79 had been making progress with her fitness as she teased a surprise appearance from Raducanu in Glasgow.

Raducanu’s 2022 season came to an early end as she was forced to pull out of the Transylvania Open with a wrist injury. The British No 1 had hoped to recover in time to represent her country at the BJK Cup Finals this month but on Friday she announced that she was withdrawing from the team tournament.

Team captain Keothavong has now given an update on the teenager’s fitness after the 19-year-old started working with Jez Green – the former strength and conditioning trainer to the likes of Andy Murray, Alexander Zverev and Dominic Thiem – and says things are looking up.

“She did everything to basically be fit for Glasgow, but it wasn’t going to happen,” the former world No 48 said. It is thought that Raducanu’s injury has stopped her from hitting on a court, and the team GB captain revealed that the British No 1 only withdrew from the BJK Cup when she attempted to have a hit and was left disappointed.

While she didn’t have enough time to recover before Britain hosted the Finals in Glasgow, Keothavong said that there was already a change in Raducanu’s physique following her recent training sessions at the National Tennis Centre in Roehampton. She added: “That’s a priority at the moment and she’s looking pretty fit and strong.

“I think the work that she’s put in over the last few weeks, when you see her you’ll see [it].” Raducanu’s fitness has been an issue at times in her freshman year on the professional tennis tour, with the Bromley teenager retiring mid-match on four separate occasions this season.

But Keothavong thought those days could be behind the Brit, with the 2021 US Open champion already seeing an improvement with the wrist injury that cut her season short. “Wrist injuries are never easy, but I think this one is under control,” she explained. “She’s got good people around her and she’s used her time to really work on other areas of her fitness. Right now, from what I understand, it’s something that she will recover from and she’s confident of that, she just needs a bit more time and Billie Jean King Cup is too soon.”

While Raducanu has been ruled out of playing in front of a home crowd in Glasgow this month, the 39-year-old has hinted that fans may still be able to see their top-ranked player at the BJK Cup Finals as she teased a potential surprise appearance from the world No 79, who could be in the stands to cheer on her team.

“It just depends on other things and she’s obviously trying to focus on getting fit and ready. If she’s not there supporting on the side, then she will be from afar,” Keothavong said. Raducanu’s replacements have already been announced, as only four of the five-woman squad had been confirmed before she withdrew, which left two empty spots on the team.

Britain’s top-ranked women’s doubles pair Alicia Barnett and Olivia Nicholls have received their first call-up for the squad, as Keothavong explained her decision. “What [Barnett and Nicholls] have done over the past year has surprised a lot of people, me included, but I think they’ve proven themselves,” she said, referencing the pair’s maiden WTA Tour title win earlier this year in Granby.

“I’m looking at potential matchups and styles of play and what can disrupt the opposition when I’m looking at the doubles match. Whoever plays it’s not going to be a straightforward match. Whether it’s singles or doubles, they’re going to have to play very well. That’s the nature of the event. But in this situation, given the format of the competition, we do have an established pair that gives me another option should I need it.”