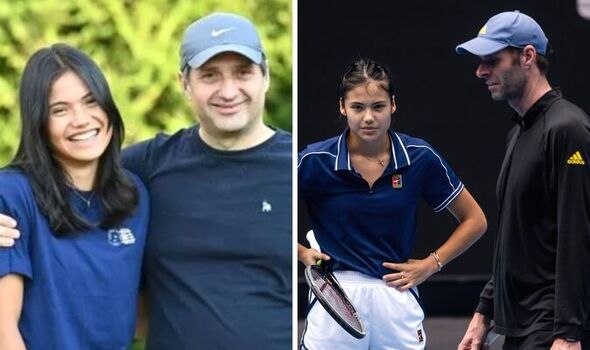 Emma Raducanu’s process for hiring and working with a coach has emerged after the Brit split with Torben Beltz after five months. Raducanu’s father is known for his unorthodox approach to coaching and it is likely his methods could be applied as the US Open champion said she will “transition to a new training model”.

Raducanu announced she was no longer working with Beltz after five months together on Tuesday. “I want to thank Torben for his coaching, professionalism and dedication over the last half a year,” she said in a statement.

“He has a huge heart and I have enjoyed our strong chemistry during the time together. I feel the best direction for my development is to transition to a new training model with the LTA supporting in the interim.” It’s the world No 11’s third surprise coaching split in nine months, as she previously axed Nigel Sears after her Wimbledon run as a wildcard before ending her partnership with Andrew Richardson weeks after winning the US Open.

It now appears that the Bromley local’s latest decision to end her work with the renowned German coach could be a product of her father Ian’s “outside-the-box” approach to coaching as comments made about her dad after Raducanu’s US Open triumph have emerged. “His outlook on tennis is wide-ranging. He is happy to think outside the box,” British coach and pundit Mark Petchey previously claimed.

“As a coach, he challenges you – his view is the coach does not necessarily know everything. I thought he had a good handle on what the particular needs of his daughter were.” A ‘British insider’ also told The Telegraph that Ian puts potential coaches through something of a brutal process, requiring them to prove why they are a good fit for his daughter.

“Most people who are getting established in the game look at an experienced coach and assume that they must be an expert. With the Raducanus, it’s the other way around,” they said. “You have to actually impress them, even if you have a big reputation, because they start from the principle that most people don’t actually know what they’re talking about.”

Raducanu’s father previously claimed there should be a “coach for every shot” and his methods appear to achieve just that, as the insider claimed the Raducanus take the necessary information for a coach before getting rid of them. They continued: “Then they size you up, work out what you’re good at, suck out all the information they can get from you, and move on.

“It’s a brilliant method, although it’s quite bruising to the egos of people who think they have an all-round mastery of tennis coaching. Because these people are often being asked for some specific information, like, ‘How can I get more width on my backhand return?’ Or whatever it is. And then it’s, ‘Okay, I’ve got it, thank you very much. Bye.'”

With Raducanu not set to appoint a head coach in the short-term, she could be reverting to her father’s method of getting a range of guidance from different coaches to assist her with different tactics and tournaments before moving on to the next one. For now, Raducanu will be joined by the LTA’s Iain Bates in Madrid next week.