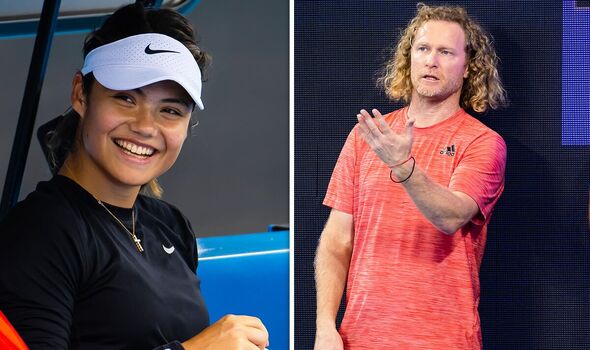 Emma Raducanu has brushed off a barb from her former coach – and insisted she has the right team in place for 2023. The British No 1 will start the Australian Open at midnight UK time tonight with German Sebastian Sachs in charge – her fifth coach since her breakthrough at Wimbledon in 2021.

Her last coach Dmitry Tursanov quit his short-term contract in October to work with Belinda Bencic and claimed: “I was walking away from Emma regardless of whether there was another [player] available or not. We didn’t agree on the terms and there were some red flags that just couldn’t be ignored.”

The criticism was interpreted as a dig at Raducanu’s father Ian who helps manage her career. And the former US Open champion told the BBC: “I think that the way I have been brought up, I have always had quite a lot of people around me.

“And it’s more just been me picking and choosing what I want to take and what I want to leave. I don’t really think anything out of the ordinary. Yeah, he can say what he thinks.”

Raducanu is in Melbourne with Bach and fitness coach Will Herbert, who was part of her team in New York. Her IMG agents Chris Helliar and Max Eisenbud are also in Melbourne.

“I think a part of it is that I didn’t have that core, small team,” she added. “I didn’t have that solid set-up and the team that I really fully trusted. So for me this year, now I feel like I have definitely got that more so, and I don’t probably need to consult as wide as much.”

“I think that we’ve been doing some great work. He’s very objective. He’s really experienced, actually. I just love the way that we’re working together and I really hope it lasts.”

Raducanu suffered an ankle injury in Auckland earlier this month but has declared herself fit to play her first round match in the first match in the 1573 Arena against world No 76 Tamara Korpatsch of Germany at 11am local time. The world No 77 said: “I started training midweek, like a few days ago really and have just been building it up, starting from the basics and then and then introducing other things introducing movement, returns and stuff.

“I mean, for sure. It would be a lie to say that I wasn’t worried at first, but I’ve just been so happy to be on the court. I’ve actually been swinging and playing surprisingly free and well. So yeah, I’m just so happy to be ready for Monday.

Korpatsch, 27, spent her early career going to tournaments in a camper van with her coach and father Thomas – and has yet to win a Grand Slam main draw match after losing to Heather Watson at Wimbledon.

Raducanu won their only previous meeting last year. “I already know her,” said the German. “I already played against her in Stuttgart on clay, it was three sets, I didn’t play my best.

“I know her now and maybe I can do it better. And this is a hard court. Okay. I love clay more than hard court but yeah, it will not be easy.

“She’s a very, very good player. It’s my first time here in Australia, also my first time in Melbourne so I’m very excited and I feel good. This is my fourth Grand Slam and I lost my first three so hopefully I can win this one.”