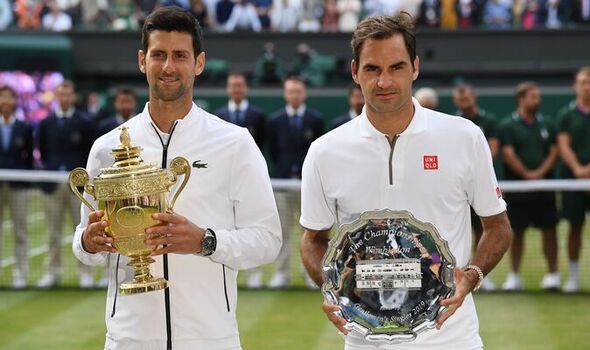 Novak Djokovic has made a confession about his 2019 Wimbledon victory more than three years after saving championship points to defeat Roger Federer in an epic five-setter that was the first match to use the tournament’s 12-12 tiebreak. The world No 7 believes he got lucky after thinking the match was “over” following one of Federer’s serves.

Djokovic is preparing to play his penultimate tournament of the year at the Paris Masters after something of an unusual season. The 35-year-old has been unable to play several big events this year because of his unvaccinated status, but was still able to lift a Grand Slam title at Wimbledon in July as he claimed that the tournament “always” gave him a confidence boost.

Once known as Federer’s playground, the Serb is starting to make the All England Club his own as he now has seven Wimbledon titles to the retired Swiss star’s eight, and won their last-ever meeting at SW19 during the championship match in 2019. Now, more than three years later, Djokovic has confessed that he was lucky to beat the 41-year-old in that final.

Back when the four Grand Slams did not have the same format for the final set, Federer served for the title at 8-7 in the fifth and had two championship points on his serve at 40-15. But he failed to convert them and ultimately lost to Djokovic in a tiebreak at 12-12 – a new rule at Wimbledon that year and the first of the new tiebreaks to be played.

The 21-time Major winner has now admitted that he thought the match was “over” on the second championship point at 40-30 in a new interview ahead of his Paris Masters campaign. “I started my movement a little in advance, anticipating a crossed serve,” he told French radio station RMC.

“And finally he served on the T. At this point I thought it was over. The ball could have met the net. I was a bit lucky at this moment, it’s fair to say.” The match ultimately went on to have a huge impact on the Grand Slam race between the Big Three, as Federer was never able to win another Major and remained on 20 overall.

It meant that Rafael Nadal and Djokovic were both able to overtake him this year, with the Spaniard making history by winning his 21st and 22nd at the Australian Open before the world No 7 won his 21st at Wimbledon.

Federer never played another Grand Slam final again, making just three more appearances at Majors during the 2019 US Open, 2020 Australian Open and 2021 Wimbledon as a knee injury saw him out of action for the better part of the last two years before he retired at last month’s Laver Cup.